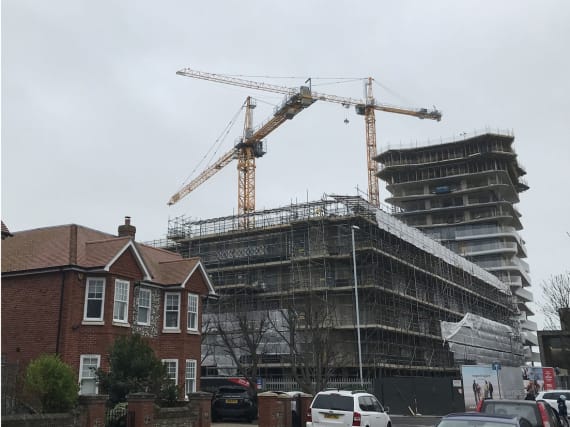 The hammering gale-force winds of Storm Ciara are on fully display in a southern seaside town, where they are causing a huge crane to spin around.

A yellow crane at a building site in Worthing, West Sussex was seen rotating freely in the wind as 41mph gusts battered the south coast.

Normally a solid presence high above a 141-home development on the seafront, Sunday’s storm has turned the crane into a spinning top.

Sussex Police said they had received several reports about the whirling crane but confirmed there is no cause for concern as it is designed to move with the wind.

The force said on Twitter: “Sussex Police have had a number of reports about the crane on Brighton Road Worthing turning in the high winds.

“Sussex Police have been in contact with the developers and the crane’s safety mechanism is designed to let it move in the wind.”

Further down the coast a handful of residents were seen gathering on Worthing Pier to experience the force of the storm and watch the crashing waves.