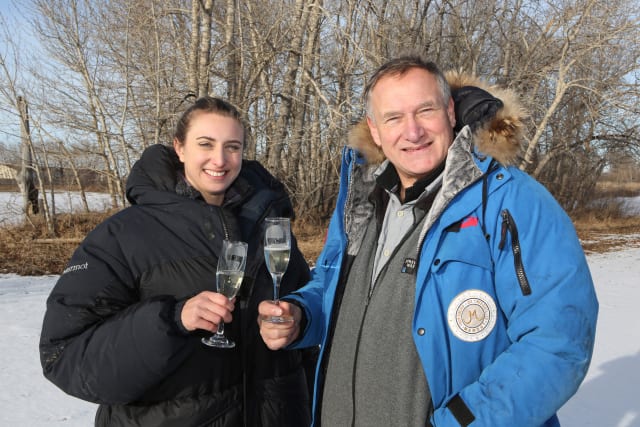 The daughter of a record-breaking explorer has added to her own collection of achievements by breaking the women’s world record for altitude in a small hot air balloon.

Alicia Hempleman-Adams, 30, added to her impressive list of accomplishments on Friday when she flew 15,100ft (4,605m) in the air, enduring temperatures as low as minus 30C during her ascent.

The fashion consultant travelled from her home in Bath to take flight in Calgary, Canada, and broke the record for the AX4 class with the small balloon, a 3ft by 3ft basket and a tiny oxygen tank.

In the pursuit, the AX4 balloon class is one of the smallest categories with balloons barely the height of a double-decker bus.

The daughter of renowned explorer Sir David Hempleman-Adams, Ms Hempleman-Adams was the youngest person to reach the North Pole when she visited her father at the age of eight.

At the age of 15, Ms Hempleman-Adams became the youngest person to ski across Baffin Island in the Arctic north of Canada.

During the flight, the relative novice beat the previous female altitude world record of 4,272m, and smashed the British altitude record of 2,293m, set 25 years ago.

She told the PA news agency: “I think there’s a bit of luck with these things and it was really lucky.

“It just popped up there and back down again.

“We have a new balloon, it’s sort of an eco balloon and it was amazing for the altitude and also we used hardly any fuel, we managed to do a lot more than we were expecting to do on our first attempt.

“I won’t say it was easy because when you’re up that high and you’re looking down you’re thinking ‘oh shit’ but the balloon made it a lot more enjoyable.”

Ms Hempleman-Adams added that she hates being cold but is driven by having a target to work towards in life.

She said: “I find it a drive to have a target and have something to work towards.

“I was in London, working full time doing long hours for a couple of years and now I’m in a place that allows me to be a bit more flexible and take more opportunities like this.

“It’s amazing I could do it on the first attempt.”

Her father Sir David holds more than 20 hot air balloon world records including being the only person to fly a balloon to the North Pole and back.

Sir David was part of the team who greeted Ms Hempleman-Adams after her triumphant return to the ground.

He said: “I am pleased as punch that Alicia has broken these records, but it’s very dangerous up there so I’m also relieved that she came down safe and sound.

“The Duke of Edinburgh told me once that there’s no such thing as an easy world record and he was so right.

“Alicia should be very proud.

“Although I think this flight scared the life out of her so hopefully she’ll keep her feet on the ground for a while now.

“You bring your daughters up, educate them and teach them how to fly and then they go off and beat your records!”

Ms Hempleman-Adams added: “When I told him I wanted to go for the record I think he thought I was mad, so I’m really proud to have shown him that I really could do it.”