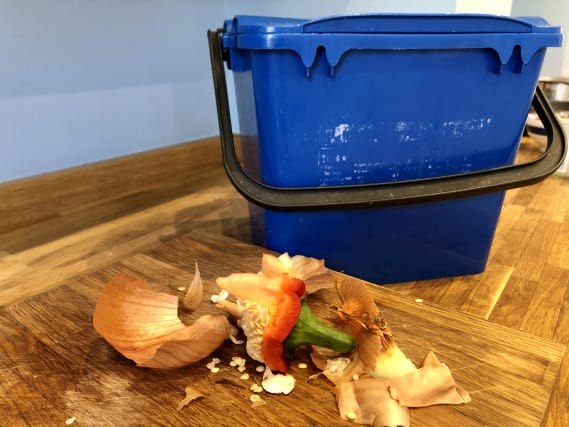 More than 13.4 million English households currently do not get their kitchen scraps picked up separately from the black bin rubbish, an analysis of data by the PA news agency suggests.

But the Government has set out plans in its Environment Bill for food waste to be collected separately from all households by 2023 to cut the amount of food wasted and tackle greenhouse gas emissions.

A recent consultation showed that if all local authorities provided food waste collections, 1.35 million tonnes more food waste would be picked up by 2029, cutting greenhouse gases from food rotting in landfill by an estimated 1.25 million tonnes a year, officials said.

Councils say they need funding to bring in universal food waste collections – and practical challenges have to be overcome.

Typically, food waste is collected from houses using a caddy in the kitchen and then putting out the scraps in another container outside for picking up, or it can be combined with garden waste.

Flats pose more of a challenge, with some given communal bins to empty their caddies into.

Figures provided by 326 English local authorities to waste reduction body Wrap for 2018/2019 shows almost half – 160 councils, covering 11.7 million households – do not provide any food waste collections for their residents.

According to the data, 115 councils do provide a separate food waste collection for some or all of their households, including some trialling schemes for a small number of homes.

A further 38 local authorities provide a system where people can dispose of food leftovers along with garden waste such as grass and hedge clippings, while 13 offer a mixture of the two systems to various households.

Almost all councils that provide a separate food waste collection pick up the kitchen waste weekly, while most of the councils which combine food scraps with garden material do the rounds once a fortnight.

But the data shows only 64 English councils – around one in five – provide food waste collections for all the households they collect rubbish from, though many more pick up kitchen scraps for most of the families in their area.

Overall, just under 6.9 million homes are offered a separate food waste collection and almost 3.4 million have a mixed garden and food waste system, the figures suggest.

The data supplied by councils suggest they pick up rubbish from an estimated 23.7 million households.

This means that while 10.3 million English households can recycle their leftover food through their council collections, more than 13.4 million are not able to do so.

The figures reveal the scale of the challenge for town halls to meet the Government’s requirement for all homes to have food waste collections.

In addition, the information does not reflect how many families who have access to food waste recycling actually use it, and how many are still throwing leftovers, scraps and gone-off food into the bin.

But David Renard, environment spokesman for the LGA, said: “Councils would need to be fully funded to meet new costs from introducing weekly food waste collections, regardless of whether or not they have been providing a food waste service voluntarily.”

He warned that introducing mandatory weekly pickups could affect waste disposal contracts and lead to councils incurring financial penalties, and there were practical challenges to providing universal collections.

The Government says its preference is for separate collections rather than with garden waste.

But Mr Renard added: “Introducing a separate collection of food waste – one that isn’t mixed with garden waste – should be a local decision for councils who know the most cost-effective solution, particularly if they have already invested in composting technology and collection systems.”

A spokeswoman for the Environment Department (Defra) said: “Nobody wants to see good, nutritious food going to waste and harming our environment, which is why we’ve committed to eliminating food waste from landfill by 2030.

“As part of this we will be working closely with local authorities to end confusion over household recycling and ensure food waste is routinely collected from every household, business and organisation across the country.”

Claire Shrewsbury, head of government and communities at Wrap, said: “Wrap evidence over many years has shown that well-designed, well-funded collections where there is good communication with residents and the provision of free caddy liners can help in reducing food waste in the home, as well as drive up recycling – both key steps to becoming more sustainable and protecting our environment.”