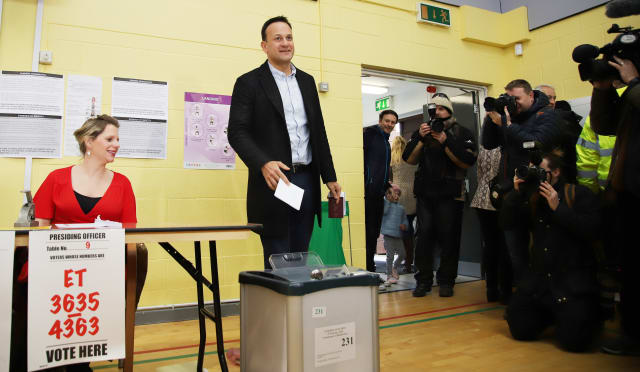 The leaders of the main Irish political parties have cast their votes in the 2020 general election.

Micheal Martin, flanked by his wife Mary, daughter Aoibhe and sons Micheal Aodh and Cillian, cast their votes early on Saturday morning in Ballinlough in front of a waiting media pack, with Aoibhe Martin stating it was “the easiest choice ever” as she cast her ballot.

Mr Martin kissed his wife outside for waiting photographers, and spoke to constituents about what he deemed an “energetic” campaign.

His opposition rival, the Fine Gael leader and Taoiseach Leo Varadkar voted at his local polling station in Castleknock in Dublin at around 12.30pm.

Mr Varadkar brought a box of Roses sweets to give to count staff at the centre and thanked supporters for their work in the campaign.

President Michael D Higgins and his wife Sabina cast their votes at St Mary’s Hospital in Dublin, where the President mentioned how mild the weather had been so far.

Ms McDonald posted a video from outside her polling station on social media encouraging all voters to cast their ballot on Saturday to “vote for change”.

While the country braces for winds and rain brought on by Storm Ciara, most major cities remained unaffected by weather by early Saturday afternoon, which pollsters said could aid a higher turnout than in other years.