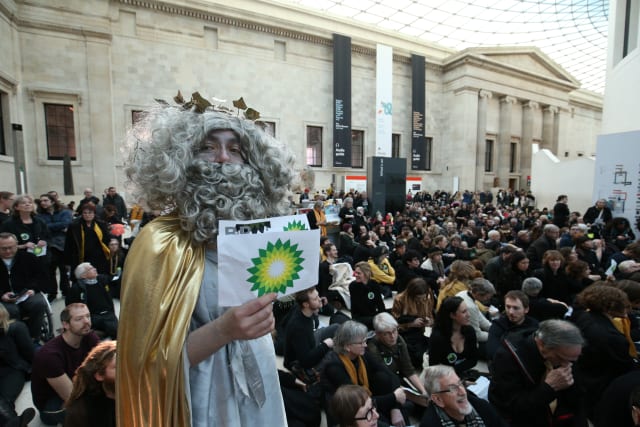 Around 1,500 people have protested at the British Museum over energy company BP’s sponsorship of a Troy exhibition.

Climate activists BP Or Not BP? wheeled a 13ft-high Trojan horse into the grounds of the museum on Friday in response to the sponsorship deal.

The horse, which had space for 10 activists inside, had speakers that played sounds of drilling and horses neighing.

As part of Saturday’s mass protest, the British Museum allowed the pressure group to host talks and group singing activities inside some of its exhibition rooms.

In front of the main gates, activists dressed as Greek gods and Trojan soldiers handed leaflets to supporters and museum visitors.

Crowds of supporters could be heard cheering and clapping as the activists gave speeches about climate change.

At 3.45pm they staged a “sit-in” inside the Great Hall for 15 minutes, singing and chanting “BP must fall”.

The campaigners also organised speeches from people of different heritages who condemned colonialism.

Primary school teacher Lydia Somerville, 56, travelled to London from her Hertfordshire home with her daughter Scarlett, 14, to take part.

They told the PA news agency they had previously participated in a “die-in” protest at the National Portrait Gallery over its BP sponsorship deal.

Mrs Somerville said: “The protest is good fun. It’s really organised – we’ve joined in the singing. It’s really powerful and there’s a good mix of ages. The Trojan horse too is a great message.”

Scarlett said: “Accepting the sponsorship essentially accepts what they’re doing is right. They’re one of the biggest oil companies in the world.”

Former education professor Stephen Bolton, 72, and his wife Gillie, 68, a former senior medicine researcher, who are retired and live in London, said they championed BP Or Not BP’s cause as they are “respectful” and “pacifists”.

Mrs Bolton said: “We’ve resigned our friendship (with the museum) over the BP sponsorship because we think the world is hurtling towards disaster and BP isn’t helping at all – it’s hindering.

“BP is a danger to the world and to our children and grandchildren. We strongly object to the British Museum accepting sponsorship from BP and we want them to follow steps from other museums in giving up the sponsorship.”

Mr Bolton said: “We think the Trojan horse is brilliant, we helped crowdfund it because it’s an amazingly good cause.”

Jess Worth, co-founder of BP Or Not BP?, said: “We brought in the Trojan horse early in the morning through a side gate and took one of the wheels off so it couldn’t be moved.

“We negotiated with the British Museum and told them what we were planning to do. The negotiation went really well and they allowed two of us to stay overnight last night. There has been a lot of good-natured, mutual respect from the British Museum.

“It’s brilliant to have so much support. People really, really care when they see the British Museum partnering with organisations like BP. They feel personally upset and motivated to protest about it.”

A spokesman for BP said: “Our new CEO, Bernard Looney, will set out his low-carbon ambition for BP next week. He understands the frustration and anger and shares protesters’ deep concern about climate change.

“He hopes that what he has to say then will give people a sense that we get it and are very serious about working to address the problem.”