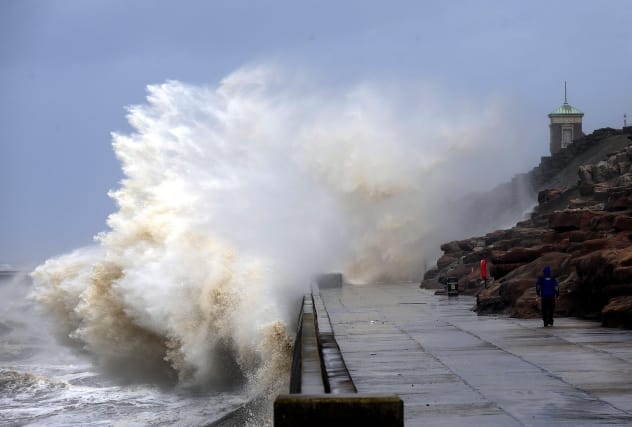 Dozens of domestic and international flights have been cancelled as Storm Ciara is set to batter the UK and Ireland with heavy rain and winds of more than 80 miles per hour.

Weather warnings have been issued across the country for Sunday amid forecasts of very strong gusts and the risk of flooding.

Rail companies in England, Scotland and Wales have urged passengers not to travel and say they will operate reduced timetables and speed restrictions on Sunday.

Strong winds have the potential to damage overhead electrical wires and tracks due to debris or falling trees.

Disruption could continue into Monday morning as repair work may be hampered by the conditions.

Heathrow Airport said it had agreed with its airline partners to "consolidate" Sunday's flight schedule in a bid to minimise the number of cancelled flights.

British Airways said in a statement: "Like all airlines operating into and out of the UK tomorrow, we are expecting to be impacted by the adverse weather conditions across parts of the UK on Sunday."

The airline said it was offering rebooking options for customers on domestic and European flights flying to and from Heathrow, Gatwick and London City on Sunday.

Virgin Atlantic has posted a list of cancelled flights on its website. It said it was "contacting affected customers and rearranging their travel arrangements".

Forecasters have warned flying debris could lead to injuries or endanger lives.

Officials also warned of possible damage to buildings and the chance of power cuts.

Yellow weather warnings cover the whole UK with the heaviest rain expected over high ground, where 50-70mm is expected widely with as much as 100mm in a few locations.

Storm Ciara was named by the Met Office on Wednesday and is moving eastwards across the UK and Ireland.

Alex Burkill, a meteorologist at the Met Office, said the wet and windy weather is "the prelude, if you will, to what is Storm Ciara".

He said the most pressing of the Met Office warnings is the amber wind warning.

"That's where we're likely to see significant impacts from the wind. We're taking some damage to property, flying debris, and that could bring the risk of injury to people, as well as just the usual things such as power outages and disruption to travel," he said.

"It is worth bearing in mind that the strong winds on Sunday are going to be very widespread so it's across the whole of the UK where we're going to see very strong winds, so the impact will be widespread."

Mr Burkill said gusts of 70-80mph were expected, "and it could be a little bit stronger than that in some exposed spots".

The opening ceremony of Galway's year as European Capital of Culture, due to take place on Saturday evening, was cancelled due to bad weather buffeting Ireland's west coast.

The London Winter Run 10k event – due to be attended by 25,000 runners – was cancelled after organisers said they were "not able to guarantee the safety of our runners, crew and volunteers".

"If you see someone else in danger in the water, call 999 and ask for the coastguard. If you have something that floats that they can hold on to, throw it to them.

"Don't go in the water yourself – too many people drown trying to save others."