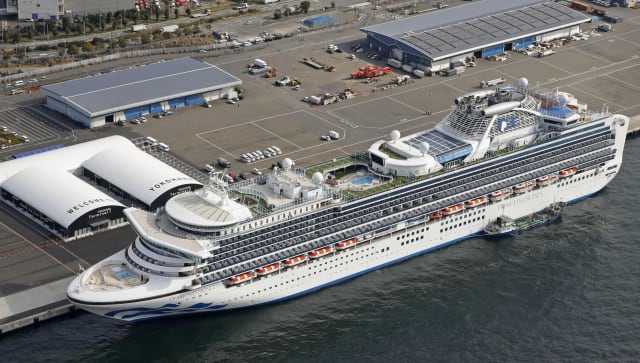 A British honeymooner transferred from the cruise liner Diamond Princess to hospital in Japan with the coronavirus is said to be feeling well and in good spirits.

Alan Steele, from Wolverhampton, was moved to hospital on Friday while his wife Wendy remained on board the ship.

The liner has been isolated in the port of Yokohama, with 61 people having been taken to hospitals after testing positive for the virus.

Wendy Marshall Steele has been in telephone contact with her husband. She said on Saturday afternoon that he was still feeling healthy.

“Alan is well, Japanese doctors are excellent,” she posted on Facebook.

“He is in a little room. Just Dr and nurse visit him.”

Mrs Marshall Steele said she was also well but had “cabin fever” as she continued to be confined to her room on the ship, a status shared with nearly 3,700 other passengers and crew.

“It was a hard first night without Alan. But hey, we are constantly in touch. Japanese doctors are excellent and he is in safe hands,” she wrote.

A total of 78 British passport holders – including crew – were among those who boarded the ship, sources told the PA news agency.

The ship’s operator, Princess Cruises, said the vessel’s quarantine was due to end on February 19, barring “unforeseen developments”, and confirmed all affected guests were being taken to hospitals.

Meanwhile, some 150 Britons being flown back from the coronavirus-hit city of Wuhan on Sunday will be quarantined at a facility in Milton Keynes.

South Central Ambulance Service said Kents Hill Park, a conference centre and hotel, would be used to house the returning citizens after they landed at RAF Brize Norton.

The group will remain at the site in isolation for 14 days, it added.

Everyone boarding the plane in the Chinese city, which is the epicentre of the outbreak, will be assessed and will continue to be monitored after landing in the UK on Sunday morning.

On Tuesday, Foreign Secretary Dominic Raab said that the flight would be the final service chartered by the Foreign Office to bring UK nationals back from the Chinese city.

The ambulance service said the presence of the group in Milton Keynes, Buckinghamshire, does not present a risk to local people.

The first group of Britons who returned on a flight last month are continuing their period of quarantine at Arrowe Park Hospital on the Wirral.

“The local site has been chosen because it offers appropriate accommodation and other facilities for those coming back from Wuhan while they stay in Milton Keynes,” the ambulance service said.

The death toll in the coronavirus outbreak in mainland China rose to 722 on Saturday, while new cases jumped to 34,546.