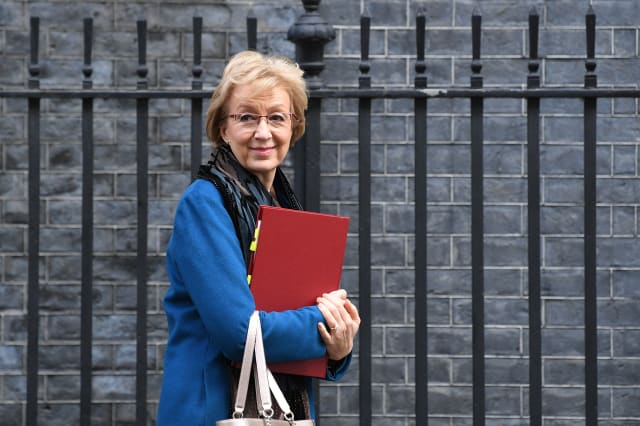 Business Secretary Andrea Leadsom has issued a thinly-veiled warning to Boris Johnson not to slash the number of female ministers in his Cabinet reshuffle.

Mrs Leadsom made what will widely be seen as a reminder to her Tory party leader in a column in The Daily Telegraph as Mr Johnson sits down this weekend to reshape his ministerial line-up.

The Prime Minister is widely expected to cut five female ministers from the eight in his 31-member Cabinet, with The Telegraph reporting Mrs Leadsom believes she will be among them.

Mrs Leadsom made her comments in a column addressing the issue of female board members amongst FTSE 100 companies.

“Working in the City in the Nineties, I saw myself how a male-dominated environment can limit a career,” wrote Mrs Leadsom, 56, the member for South Northamptonshire since 2010.

“Of course, things have changed massively in the years since. But only by shining a light on unacceptable behaviour and calling it out for what it is, will workplaces foster an environment and culture that values men and women equally.”

Mrs Leadsom said steps the Government was taking – such as protecting women from workplace discrimination due to pregnancy – would enhance business and improve people’s lives, “helping to unleash the full potential that the UK has to offer as a truly independent nation”.

“We should be proud of the great strides this country has taken over the last decades to eradicate discrimination from our workplaces, while also knowing that we need to go further to make the UK fit for the future,” she wrote.

“It would be much better if we just didn’t have to talk about diversity anymore; if equality was the absolute norm. It will take some time to get there – and I truly believe we will, especially if we keep up the good progress to date.”

The only women considered safe are Home Secretary Priti Patel and Baroness Evans, the Leader of the House of Lords.