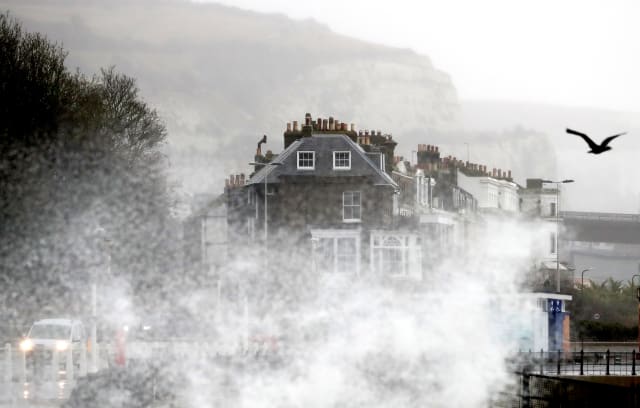 Weather warnings have been issued for parts of the UK on Saturday as Storm Ciara brings strong gales and heavy rain over the weekend.

Forecasters warned there could be delays and cancellations to air, ferry and train services, damage to buildings and a chance of power cuts caused by wild weather conditions.

Yellow warnings of wind have been issued by the Met Office for north-western parts of the UK on Saturday.

On Sunday, a yellow warning of wind covers the entire country, while an amber warning has been issued for south-east England.

Several rail firms announced they will operate reduced timetables amid speed restrictions due to gusts of up to 80mph.

Network Rail and train operators in England issued an alert to passengers, which read: “Only travel by train this Sunday if absolutely necessary.”

Strong winds have the potential to damage overhead electric wires and tracks due to debris or trees falling onto the railway.

Disruption could continue into Monday morning as repair work may be hampered by the conditions.

Passengers are urged to check for updates before they travel.

The London Winter Run 10k event – due to be attended by 25,000 runners – was cancelled after organisers said they were “not able to guarantee the safety of our runners, crew and volunteers”.

Storm Ciara was named by the Met Office on Wednesday and is moving eastwards towards the UK and Ireland.

Met Office chief meteorologist Frank Saunders said: “Storm Ciara will bring damaging winds and heavy rain across the UK this weekend and we have issued a range of severe weather warnings giving people time to prepare for potential impacts of the storm.

“Winds will increase through Saturday across Northern Ireland, Scotland, northern England and Wales, before turning very windy across the rest of UK through the early hours of Sunday morning.

“Gusts of 50-60mph are expected quite widely across inland areas, with even stronger gusts of 80mph or higher along coastal areas, especially in south-east England and northern Scotland.”

Drivers are being warned to take extra care on the roads due to the potential of difficult conditions caused by heavy rain, particularly on coastal or exposed routes.

Guy Addington, regional water safety lead at the RNLI, said: “This rough weather could making visiting our coasts around the UK and Ireland treacherous and bring very dangerous sea conditions.

“If you see someone else in danger in the water, call 999 and ask for the Coastguard. If you have something that floats that they can hold on to, throw it to them.

“Don’t go in the water yourself – too many people drown trying to save others.”