Voters head for the polls in Ireland 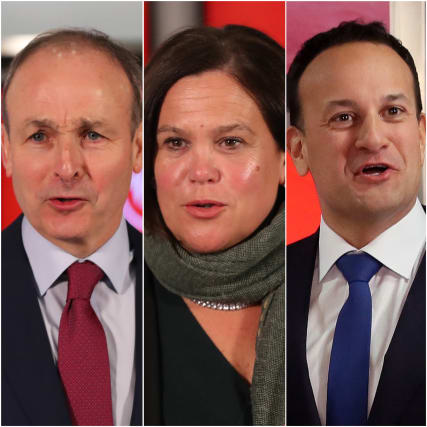 Voters are heading to the polls in Ireland in what is shaping up to be one of the most unpredictable elections in years.

On a day when Storm Ciara threatens to dampen turnout, Ireland is having its first Saturday General Election for more than 100 years.

If the opinion polls are proved right, Sinn Fein is on course to challenge the 90 year duopoly of the state’s two main parties, Fianna Fail and Fine Gael.

Taoiseach and Fine Gael leader Leo Varadkar is facing a hard battle to hang on to power, with recent polls putting his party in third place.

In the last major survey of the electorate before polling day, Sinn Fein was leading the popularity stakes on 25%, with Fianna Fail second on 23% and Mr Varadkar’s party on 20%.

If those levels of support are borne out when the counting of votes begins on Sunday, it would herald a major breakthrough for Sinn Fein south of the border.

However, the odds would still be stacked against party leader Mary Lou McDonald leading the next government as Taoiseach.

Its polling performance has far surpassed the expectations of party strategists who, coming off the back of several disappointing elections, only fielded 42 candidates in the race for the Dail parliament’s 160 seats.

That means even if Sinn Fein had a perfect day and won all 42 seats – an extremely unlikely outcome in itself – it would still end up well short of a majority.

No party is expected to reach the 80-seat threshold to enable it to govern on its own, and a coalition administration of some complexion is almost inevitable.

But Sinn Fein is in a slightly different position to its two main rivals, as it may be unable to find enough like-minded left-leaning allies to form a workable government.

Fianna Fail and Fine Gael, both centre-right in outlook, have unequivocally ruled out any partnership with Sinn Fein, and for either to change position would represent a major U-turn.

If it is unable to strike an alliance with either of the other two main parties, Sinn Fein would be unlikely to secure a place in the next government.

Fianna Fail topped the opinion polls early in the campaign, and leader Micheal Martin could yet emerge as Ireland’s next taoiseach.

Mr Varadkar, meanwhile, will be hoping his administration’s economic record and handling of the Brexit process will convince enough voters to renew his tenure in Government Buildings in Dublin.

However, Brexit did not feature prominently in a campaign that was instead dominated by domestic issues such as spiralling rental prices, record-breaking homeless numbers, controversy over the state pension age and a struggling health service.

There appears to be a mood for change and Sinn Fein could attract support from younger voters who want to end Fine Gael’s nine years in power but are unwilling to trust Fianna Fail again after the financial crash that marked its last term of office.

Faced with the Sinn Fein surge, Fine Gael and Fianna Fail have been keen to remind the electorate of the party’s historic IRA links and, as the campaign entered its latter stages, the past crimes of the provisional movement drew increasing focus.

Mr Varadkar’s last government – a minority administration that included several independent TDs – was sustained in power through a historic confidence and supply arrangement with Fianna Fail.

That landmark pact between two parties founded from opposing sides of Ireland’s civil war of the 1920s took 70 days to negotiate following the inconclusive 2016 General Election.

Ireland could be in for more protracted government-formation talks if this election produces another fractured result.

The willingness of smaller parties such as Labour and the Greens to become a junior coalition partner could prove critical.

A new confidence and supply deal cannot be ruled out – potentially a reverse of the last one, with Fine Gael supporting a Fianna Fail led-minority.

A strong result for Sinn Fein could even force Ireland’s two traditional political superpowers to contemplate the once unthinkable – a grand coalition in government together.