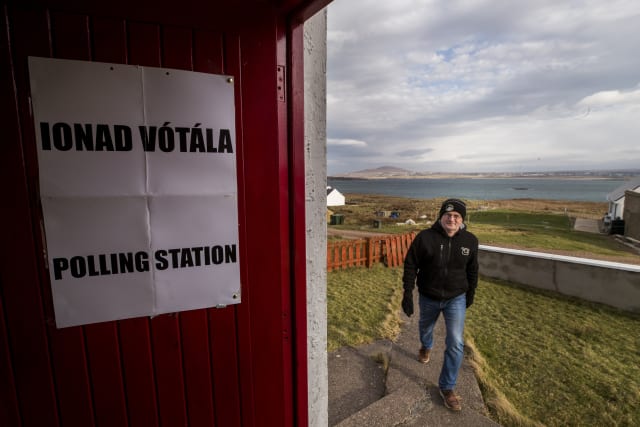 The Irish General Election was described by Taoiseach Leo Varadkar as “wide open” as the first voters cast their ballots.

Ballot boxes arrived in the country’s Atlantic islands off the coast of counties Donegal, Galway and Clare on Friday morning.

Electoral officers were escorted by members of the Gardai as they delivered the boxes to some of the most remote locations in Ireland ahead of the opening of polling stations across the rest of the nation on Saturday.

Back on the Irish mainland, the leaders of the three biggest parties were making their final moves of the campaign.

Mr Varadkar was in Ennis, Co Clare, where he expressed confidence his party would be returned on top despite recent opinion polls which have indicated a surge in support for Fianna Fail and Sinn Fein.

“I think those predictions are going to be wrong, any opinion polls that have been taken were taken before the big debate on Tuesday night which I think I did quite well in and before some of the controversies in relation to Sinn Fein became major news,” he said.

“It’s a three-horse race, three parties all within shouting distance of each other, it’s going to be down to the public,” he said.

“The public are going to vote on Saturday, they’ll decide which party is the largest party on Sunday and I believe that will be Fine Gael.”

Fianna Fail leader Micheal Martin has been in Cork where he appealed to people who are undecided not to vote for Sinn Fein and said they “have not cleansed themselves of their bloody past”.

“It is interesting because this morning I was in another part of Cork and voters have been coming up to me and asking me to promise that I won’t go into government with Sinn Fein,” he said.

“I have given that promise right throughout the election. The issue of Paul Quinn’s murder and the degree to which Sinn Fein sullied his name for so long and his mother was so courageous in coming forward.

“It illustrates the problem with Sinn Fein. They have not cleansed themselves of their bloody past and they want to create a new narrative that the war was just for the last 40 years but so many people lost their lives. People are repulsed by that and the fact that it took the mother of Paul Quinn 13 years to get an apology.

“The other issue is the incompatibility of Sinn Fein’s economic policies with ours as they are proposing an extra 4 billion euro in taxation that would choke enterprise here in Ireland. We’re a small open economy and that kind of taxation would destroy the self employed and small to medium sized businesses.”

“The people were ahead of the curve in real terms in articulating the kind of profound change that they want, people were telling us ‘we want change and by the way you are it, so get ready and serve us well’,” she said.

“I’m looking forward to the finishing line and I’m hopeful people come out and vote in great numbers, but it won’t end for us until the polls close, so we’ll be out and about talking to people, and I suspect the song that our activists insist on playing around me ‘Hello Mary Lou’ will get a blast, so I’ve my parents to thank for that,” she said.

“It’s very important people realise your vote matters, because people have been left behind by the old politics.

“Every vote is equal tomorrow, the vote of the wealthiest person, the vote of the person who is really struggling by, you have an equal say, please realise that and please come out and vote for change.

“But before any vote is cast, just to say that whatever mandate we get, we will use wisely and we won’t leave people behind.”