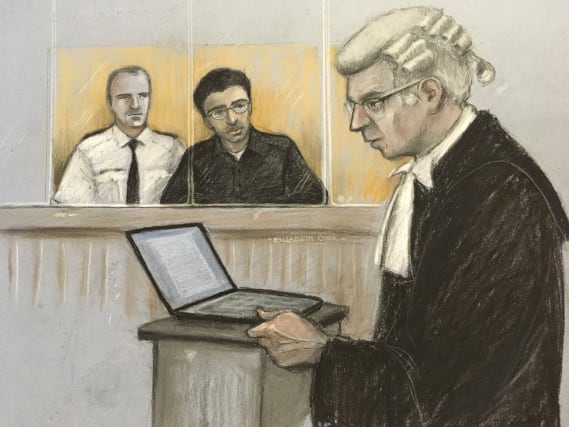 Footage from Manchester Arena suicide bomber Salman Abedi’s chilling final movements has been played to jurors at the Old Bailey.

CCTV stills showed the 22-year-old carrying a rucksack containing a homemade bomb as he made his way to the venue on May 22 2017.

He waited an hour before detonating his device, packed with screws and bolts for shrapnel, as thousands of men, women and children streamed out at the end of an Ariana Grande concert at around 10.30pm.

Hashem denies 22 counts of murder, one count of attempted murder encompassing the injured survivors, and conspiring with his brother to cause explosions.

Outlining the hours up to the attack, prosecutor Duncan Penny QC told the trial how Salman made final preparations for the bomb and visited the Arena earlier in the evening, before returning home and waiting to strike.

He later journeyed to the arena and waited for concert-goers to leave before detonating the bomb at 10.31pm, causing fatal and serious injuries to innocent bystanders and decapitating himself in the process.

Mr Penny said: “As you know, the blast and shrapnel contained within the device killed 22 bystanders and caused the catalogue of injuries about which you have heard.”

Jurors were then told about the 22 victims, aged between eight and 51, who were killed in the blast.

The prosecution say Hashem was “just as guilty” as his brother by assisting and encouraging the suicide bomber.

Mr Penny said Salman was carrying a paint tin filled with the homemade explosive TATP, placed inside a money tin, and surrounded by a large amount of shrapnel, comprising screws and nuts.

The device – weighing an estimated 36 kilos – was then packed into a rucksack, ready for detonation, Mr Penny said.

Jurors were shown an artist’s interpretation of the rucksack and the bomb contained within it during the hearing on Friday.

The court previously heard how the brothers allegedly duped friends and associates into helping to buy components of TATP, while switching vehicles and phones to ensure their actions went undetected.

After the bombing, police found a Nissan Micra parked up in the Rusholme area of Manchester containing some bags of screws and nails handled by the defendant, and more than 10 litres of sulphuric acid in the boot and traces of TATP, the court was told.