I would have told mother if I suspected brother of Arena bomb plot, says accused 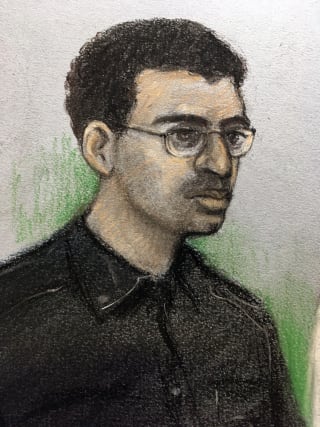 The brother of Manchester Arena bomber Salman Abedi told police he had no involvement in the “instigation, preparation or commission” of the 2017 attack, saying he would have “reported it to (his) mother” had he suspected his sibling’s murderous intent, a court heard.

Hashem Abedi said he was “shocked” when he discovered his older brother detonated his suicide bomb on May 22 2017, killing 22 and injuring hundreds of others as thousands of men, women and children left the Ariana Grande pop concert.

Hashem, 22, was arrested in Libya – where he was allegedly tortured – the day after the atrocity before being sent back to the UK to face police questions amid prosecution claims he was complicit in sourcing and stockpiling components for the bomb.

He denies 22 counts of murder, one count of attempted murder encompassing the injured survivors, and conspiring with his brother to cause explosions.

Hashem condemned his brother’s action in a statement to police made last summer and read before the jury at the Old Bailey on Friday, saying he did not think his brother “had it in him”.

The statement, read by prosecutor Duncan Penny QC, said: “I deny any involvement in the terrorist attack at the Manchester Arena on May 22 2017. I was not involved in the instigation, preparation or commission of it.

“Had I had any idea of it I would have reported it to my mother initially and then to other family members to prevent it from happening.

“I was shocked my brother had done this and felt bad for everybody. I could never have envisaged that my brother had it in him to do this to innocent people.”

Hashem declined to answer detectives’ questions but instead issued the prepared statement through his solicitor setting out his denial, the court heard.

The former electrical installation student said he was a practising Muslim, did not hold extremist views, and did not support so-called terror group Islamic State.

He accepted that he had asked various individuals to buy sulphuric acid, a key ingredient for explosives, on behalf of his brother.

He stated: “I asked him why he was getting it from different people and he told me it was because companies have a maximum limit they can sell.”

Hashem, who had been in Libya in the weeks leading up the blast, said he had been “subjected to torture” during more than two years of being held by militia men.

He said in his statement: “During the last two years I have been held in Libya by the militia and subjected to torture. It has been a difficult time for me for a number of reasons.

“I could never comprehend that my brother would have committed such a devastating attack, taking not only his own life but that of 22 others and injuring many more.

“I have been held in a very small dark cell for two years and almost two months. I have also been tortured.

“I am relieved to be back in the UK and wish to assist in this investigation as much as I can.

“I have asked my solicitor to prepare a statement for me as I wish to explain myself in the best way possible and assist the police as much as I am able to.”

The court previously heard that the brothers allegedly duped friends and associates into helping to buy components of TATP, while switching vehicles and phones to ensure their actions went undetected.

There was hushed silence in court on Friday as the prosecutor took jurors through Salman Abedi’s final movements, including the seconds before he detonated the bomb.

Later, some of the victims’ family members were comforted as details of their loved ones’ lives were read out by the prosecutor.

Mr Penny said the “dreadful events” that evening set in motion an “enormous police investigation”, with “important findings made” relating to Hashem.

Concluding the prosecution’s opening, Mr Penny said: “And so, ladies and gentlemen, the Crown suggest, it is plain that Hashem Abedi’s connection to the events in the Arena on May 22 2017 could not be clearer.

“At all stages of this dreadful chain of events, and in all locations, even through these little metal cylinders found in the basement of Granby Row (where Salman had allegedly rented in the days leading up to the blast), his presence and his involvement with this, the most monstrous of projects, loom large.”

The trial, which is due to last for eight weeks, was adjourned until Monday morning.