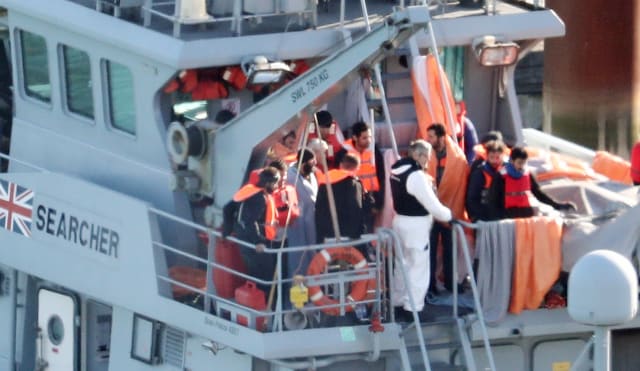 Young children have been rescued from the English Channel in near-freezing conditions after several dinghies thought to be carrying migrants tried to make the crossing to the UK.

Women and children were seen among a significant number of migrants brought to shore in Dover after the coastguard said it was responding to a "number of incidents" off the Kent coast on Thursday morning.

Witnesses reported seeing some of the group carried off on stretchers to ambulances, some being checked over by paramedics and others being wrapped in blankets after being brought to shore.

Border Force, police and lifeboat crews were also involved during the rescue operation which saw several people being brought to shore on the Home Office's patrol cutter Searcher.

Pictures from the scene show people being escorted ashore by officials and being taken to containers and ambulances to be checked over.

The latest rescue operation comes after nearly 200 migrants tried to cross the world's busiest shipping lane in just one week last month, despite repeated warnings about the risk to life of making the journey in a small boat.