Teachers delighted to surprise Duchess of Cambridge on royal visit 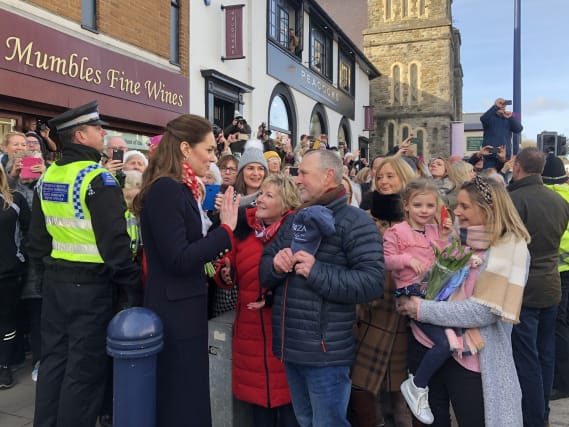 A couple who taught the Duchess of Cambridge at prep school have spoken of their delight at surprising her on a royal visit to Wales.

Denise Evans-Allford and Kevin Allford decided to drive from their home in Carmarthen to the Mumbles on Tuesday after hearing Kate was due to be there.

They arrived early at Joe's Ice Cream Parlour, where Kate and husband William were visiting, and waited outside.

Willam and Kate were driven past on their way to the RNLI's Mumbles lifeboat station, which they visited first on Tuesday morning.

The royal couple then went to the ice cream shop, where they were served ice creams and chatted to parents who had completed Kate's early years survey.

"It was very cold, we were there for an hour then the party went to the lifeboat station," Mr Allford said.

"I said 'Let's go for a coffee'. When we got back there was a crowd and we were at the back.

"Denise called a security officer over and said 'Please, if you can contact her, tell her that Denise and Kevin Evans-Allford are outside and would love just to say hello'.

The couple decided to write a note in the hope it could be passed to Kate so she could contact them in the future.

They wrote it on the back of a postcard featuring Six Nations fixtures and wrote: "Much love, Denise and Kevin Evans-Allford" along with their address and a kiss.

"The security officer very kindly took that back into the ice cream place and then somebody came to find us," Mr Allford said.

"She said 'Follow me' and she put us right next to the doorway. We really want to thank that security officer."

The couple both taught Kate, as well as siblings Pippa and James, at St Andrew's prep school in Pangbourne, Berkshire.

They described the duchess as a hard-working and conscientious pupil, who excelled at sports.

Before Tuesday, they had not seen her for 24 years, when she visited brother James at the school aged 14.

Kate came out of the ice cream parlour and approached the couple, telling them: "It's such a small world."

"We didn't know what to expect when she came out, we didn't want to break protocol," Mr Allford said.

"We wouldn't feel right curtsying or shaking hands. We didn't have to do anything in the end because she instigated a hug right away.

"She has obviously changed physically since we last saw her, she has grown about a foot but in terms of personality and the way she is, she hasn't changed at all.

"It was a great occasion for us, it was a very emotional reunion.

"After she left us, she got in the car next to William and said 'They're my former prep school tutors', and he said 'Oh, wow' and made a special effort to wave at us."

The couple have received messages from fellow former teachers, pupils and friends across the world following news of their meeting with Kate.

Kate was already a pupil at the school when they arrived in 1990, Mrs Evans-Allford to teach PE and her husband to teach French and German.

They moved into a flat on the site, where Kate and her friends would visit the family and their young daughter Angharad.

"Catherine and her cohort used to board during the week in their final year," Mr Allford said.

"Catherine and her friends used to come to our flat after prep. Our daughter was only one or two then and they would come and entertain our daughter."