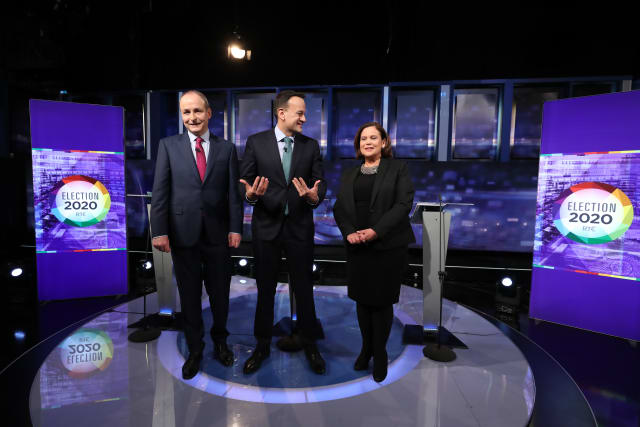 Sinn Fein has “destroyed” the good name of an innocent victim of a brutal and murderous attack, rivals said, during the final days of the Irish General Election campaign.

A recent opinion poll suggested the party had surged into the lead in the race to form the next government following discontent over housing and health.

Irish premier Leo Varadkar’s Fine Gael is in a three-way fight with Sinn Fein and Fianna Fail to become the biggest party after this weekend’s poll.

He said: “Remember, Paul Quinn was beaten to death by a gang of men who broke every single bone in his body.

“His mother Breege could not even put rosary beads in his hands in the coffin, that is what we are dealing with here.

“Both Conor Murphy and Gerry Adams, and the Sinn Fein machine, slurred his name and they have destroyed any chance for his family to get truth and justice.

Sinn Fein’s historic support for the IRA during the Northern Ireland conflict and its attitude to violence has again been in the spotlight during a winter election called because a minority Irish Government could not command enough support.

Sinn Fein’s Northern Ireland finance minister Conor Murphy this week apologised for comments made in 2007 when he branded Mr Quinn, 21, a criminal.

Ireland uses coalition government but the fragmentation of politics over recent years has challenged the traditional dominance of Fianna Fail and Fine Gael.

Rivals have accused Sinn Fein of favouring high taxes and not caring about climate change.

Mr Varadkar said: “It is strange to meet people who are going to vote for Sinn Fein because they want lower taxes.

“This is a high tax, left-wing party.

“Even though they are the ones opposed to the carbon tax.

“It is a bit strange and not a welcome trend in our politics I think.”

He said: “It is important that the parties who are proposing change are offering proposals that are doable and achievable and deliverable.”

He said Fianna Fail was the only party realistically hoping to get the numbers elected to form an alternative Government to Fine Gael, in tandem with other like-minded parties.

“Other parties, particularly Sinn Fein, I think are putting proposals that will undermine and destroy jobs and choke the lifeblood out of many small to medium-sized companies in this country and would undermine our enterprise economy,” he said.

“So we don’t want that kind of change but we do want change that can get to grips with the issues of urgent concern to people, particularly in housing and health.”