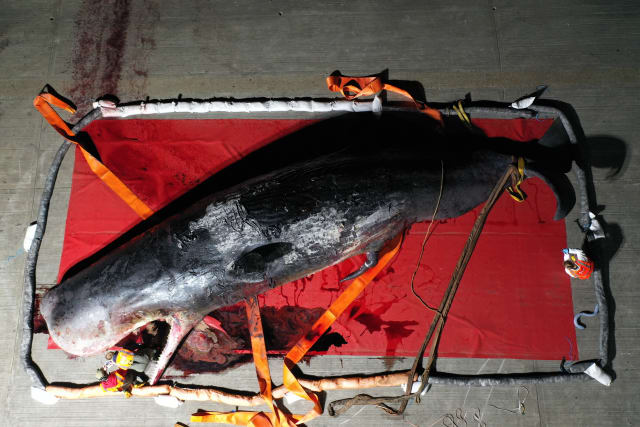 Scientists have conducted an examination of a sperm whale which stranded in the Thames estuary, far from the deep waters the marine mammals are normally found in.

The team from the Cetacean Strandings Investigation Programme (CSIP) at the Zoological Society of London (ZSL) examined the body of a 12.44m sub-adult male sperm whale.

The animal, which died in the Swale tidal channel in Kent over the weekend, showed no evidence of recent feeding, with its stomachs empty, the researchers said.

The lack of squid beaks, the sperm whale’s primary prey, suggests the animal may have been in the southern North Sea – out of its usual habitat – for some time.

The researchers also said the whale had not ingested marine rubbish or plastics.

They worked through the night at Peel Ports London Medway, carrying out a dissection and collecting a range of tissue samples for further analysis.

ZSL’s Rob Deaville, CSIP project manager, said: “The findings are consistent with live stranding of an out of habitat individual.

“Sperm whales are normally found resident in much deeper waters and the southern North Sea can be considered an abnormal habitat for the species as they are unable to feed there.

“Sperm whales have previously been recorded stranded in south-east England, including a very similar case in Kent in February 2014.

“That’s the value of monitoring programmes like the CSIP. Now with 30 years of data, we can gain real insight into the wider health of the marine environment and the frankly extraordinary wildlife that can be found around UK shores.”

The experts said the measurements and samples collected during the examination would help shed light on the life of this individual and the marine environment, and would inform future conservation efforts.