Quarter of ATMs charge customers to access money, Which? finds 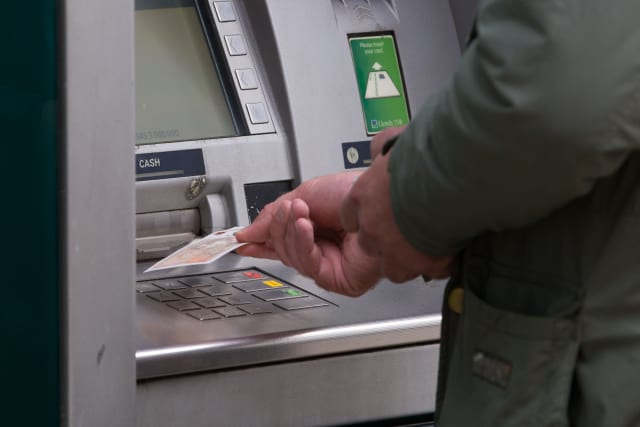 The amount people are collectively paying to access their own cash has surged, according to research from Which?

At the same time, banks have saved millions of pounds from cash machine cuts and bank branch closures in the past two years, the consumer group said.

Figures obtained by Which? show the amount paid by consumers to withdraw cash jumped by £29 million year on year from £75 million in 2018 to £104 million in 2019, as many free machines vanished or were converted to charge fees.

It said that, by contrast, changes to the cash dispenser network have collectively saved the banks £120 million since January 2018, according to figures from UK network Link.

Gareth Shaw, head of money at Which?, said: “Massive cuts to the UK’s bank branch and cash machine networks have been highly lucrative for the big banks – but highly costly for millions of consumers.

“Entire communities have been cut off from cash or forced to pay hefty fees to access their own money.

“Banks must take greater responsibility for ensuring customers are supported to make the transition to digital if branches close, and that those who are reliant on cash are not left behind by changes to the banking landscape.”

Which? said that more than 8,700 free ATMs have closed since changes to how the Link cash machine network is funded were made in January 2018.

Which? said these machines now comprise a quarter (25%) of the network – leaving customers having to pay up to £2 to make a withdrawal.

The changes have seen the number of times people have had to pay to withdraw cash increase from 46 million in 2018 to 73 million in 2019.

Natalie Ceeney, who carried out a recent Access To Cash review, said: “The startling fact that a quarter of all ATMs now charge consumers to access their own money should worry us. It’s a tax on the most vulnerable in society.”

It said legislation is needed to protect free access to cash for as long as it is needed.

Link chief executive John Howells said: “People don’t like paying to access their money and Link agrees with them.

“As people use less cash, many ATMs will become less economically viable, which means some ATMs will switch to charging.

“What’s important is that we continue to have a broad, extensive UK-wide free-to-use network.

“Link is committed to ensuring that every UK high street has free cash access via ATMs and Post Offices. We are also keen on initiatives that will incentivise retailers to provide free cashback for consumers.”

Link has a “request an ATM” scheme enabling communities to ask for a cash dispenser directly.

Mr Howells said: “We’re delighted that, since launching in October, seven new ATMs have gone live, with nine in the coming weeks.

“If your community needs help with free access to cash then you should contact Link at link.co.uk.”

Rachel Statham, economic analyst at the IPPR (Institute for Public Policy Research) think-tank, said: “To build a more inclusive digital future, the gains made from the transition towards digital payments must be shared more broadly, and access to cash protected for as long as it is needed.

“IPPR is calling for a digital transition levy on financial service providers, so that the gains made through the shift away from cash can be cycled back into communities by investing in digital skills, better connectivity, and more inclusive digital services.”

Stephen Jones, chief executive of trade association UK Finance, said: “Cash use is declining dramatically as customers turn to safer and more convenient ways to pay, such as contactless cards, and the industry is investing heavily in these new technologies to meet customer demand.”

He continued: “The industry understands the important role bank branches – and the ongoing use of cash – play in the life of local communities, and in common with other physical retail activities, decisions to close them are only taken when footfall and usage fall below a viable level.

“Customers are able to access everyday banking services at 11,500 Post Offices across the country, while banks continue to invest in services such as mobile branches to reach more rural communities.

“The banking and finance industry has introduced a number of measures to ensure access to cash remains free and widely accessible for those that continue to need it.”