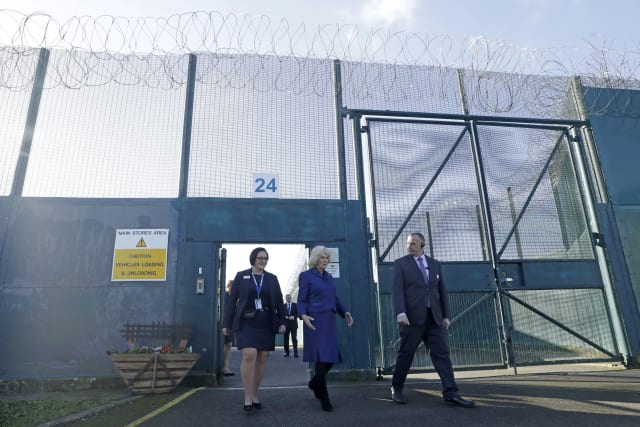 Women prisoners have told the Duchess of Cornwall about a programme of training preparing them for life outside – and their appeal to the Duchess of Sussex to join their literary festival.

Camilla met trainee chefs, seamstress and photographic shop workers during a tour of HMP Downview in south London where outside companies are working with staff to turn around the lives of inmates.

Downview has Europe’s biggest female wing housing more than 200 prisoners out of a total population of up to 300, with the institution home to a range of inmates from those serving sentences for fraud to murder.

In the prison library the duchess chatted to the organisers of the Penned Up literary festival, staged in male prisons but now in its second year at Downview with inmates hoping to attract a range of celebrities and inspirational speakers for its launch in March.

A prisoner, who did not want to be named, told Camilla: “A lot of the people who have joined Penned Up have been incarcerated to, it’s good for ladies like us to see that so that when we go back out into the public we can succeed.

“When we write to these people we’re trying to get people who will inspire us.

“A lot of them are like book writers, songwriters or they can help us get out feelings out through drama.”

She said with a laugh: “One was Meghan – so we can aim high.”

The women said they have yet to hear back from Meghan who has begun a new life with Harry and son Archie in Canada after the Sussexes gave up royal life for financial freedom, but have said they hoped celebrity chef Levi Roots would be among the guest speakers.

Meghan’s involvement with the charity Smart Works, which provides women with work wear for job interviews, was the main reason they decided to ask her to participate.

Camilla told the inmates organising the festival: “I think all these festivals are such good fun because you learn so much from them.”