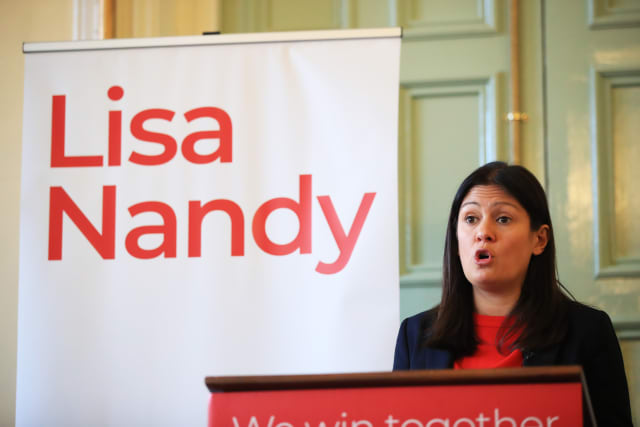 Labour leadership hopeful Lisa Nandy has set out proposals to channel billions of pounds in economic funding directly into the hands of councils.

She also said she “couldn’t disagree more” with deputy leadership candidate Richard Burgon’s plan to give party members a veto on military action.

In a speech on Thursday fleshing out her vision of local government, she proposed diverting cash currently going to local enterprise partnerships (LEPs) straight to local authorities in England.

LEPs are voluntary partnerships between councils and local businesses intended to drive economic growth in an area, taking over many of the functions of regional development agencies, which were scrapped in 2012.

She also raised the issue of misogyny, saying it had to be “called out”.

On Wednesday, Mr Burgon recalled the “disastrous and illegal” Iraq war as he put forward a plan for a members’ vote on military action – except where there was an issue of national security or when there was UN-backing.

Asked for her views during a meeting in Worksop, Nottinghamshire, Ms Nandy said: “I think Robin Cook would be ashamed of where we may end up as a party.

“I couldn’t disagree with him (Richard Burgon) more.

“At times in our history, there have been moments where we have had to stand up and go and protect people all over the world.”

Giving the example of the devastating civil conflict in Rwanda, in the 1990s, she said: “Those people cannot wait for us to ballot Labour party members.”

Ms Nandy was also asked how she would improve women’s engagement in the party.

She praised shadow culture secretary Tracy Brabin, who recently faced criticism on social media for her off-the-shoulder dress, during a House of Commons appearance.

Ms Nandy said: “I was watching Tracy Brabin yesterday, stand up to these online bullies, who have more interest talking about her shoulder than they were about the fact the media was being silenced in this country.

“Shame on the media, those sections, that reported about what she was wearing rather than reporting about the fact that they are being gagged by their Government.”

She said when first elected a decade ago she always told young women to go into politics so their voice could be heard.

“Over the last 10 years, I’ve started to hesitate before I say that to young women,” she added.

“Because I don’t know whether I want them to put themselves through what I see a lot of women go through, not just at parliamentary level but at council level as well.

“The only way this will change is if we encourage more women into politics.”

Speaking from a personal experience, she added said that on announcing her leadership bid she was told by some in Parliament “that I wasn’t ready”.

“They then went on to nominate somebody who had less than half the amount of parliamentary experience that I have,” she added.

“There is a misogyny behind that that has to be understood and has to be called out.”

Turning to her policy proposals, she would abolish the youth rate of the minimum wage as it had only “provided an excuse for cheap labour”.

Ms Nandy would also replace Universal Credit, which she said was “a system that is designed to make life so hard for people on it that they just give up”.

She said Labour had to become the party of a system that “lifts people up” and “not just a party of paternalism that just gives hand-outs to people and thinks we’ve fixed it”.

On economic funding, she said: “LEPs in England have had over £12 billion to drive economic growth in their local areas but there is clear evidence many LEPs have under-spent that allocation.”

Ms Nandy added: “Under my leadership the money currently allocated to LEPs will be handed directly to local authorities democratically accountable to the people they represented.”

She said that under her leadership, party councillors would have the right to make collective nominations for the leader and deputy leadership contests.

She would also invite the leader of the Local Government Association Labour group to attend shadow cabinet meetings along with the party’s elected leaders in Scotland and Wales.