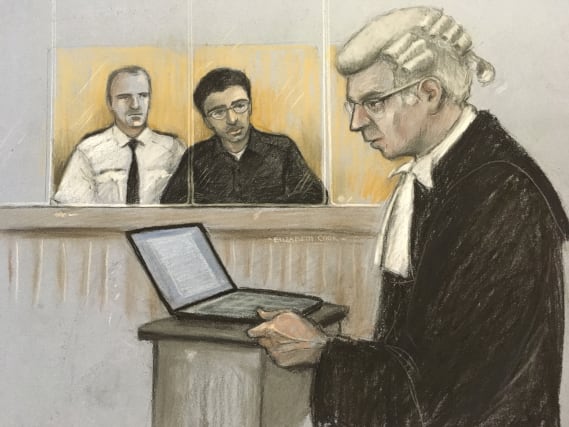 An email address containing the threat “we have come to slaughter” in Arabic was linked to the Manchester bomber’s brother and used to buy a key ingredient for homemade explosives, a court has heard.

Handwritten scraps of paper bearing the email address bedab7jeana@gmail.com were found in a bin at the family home of Salman and Hashem Abedi in the aftermath of the attack on May 22 2017, which killed 22 and injured hundreds of others, the Old Bailey was told.

Hashem, the younger brother, is accused of plotting with 22-year-old Salman, who died in the suicide bombing as concert-goers left the Ariana Grande gig.

The brothers allegedly duped friends and associates into helping to buy components of the explosive TATP, while switching vehicles and phones to ensure their actions went undetected.

On Thursday, prosecutor Duncan Penny QC said the bedab7 email address was created on March 20 2017 while connected to free wifi in the Hulme Market area of south Manchester.

Automatic number plate recognition (ANPR) data placed a Toyota Aygo bought by Hashem at the scene, it was alleged.

The vehicle, bought for £250, was later wrecked in a road crash, allegedly scuppering the brothers’ plans to transport chemicals to a home they were using in Rusholme, south Manchester.

That address, 44 Lindum Street, was used to order 30 litres of hydrogen peroxide, one of TATP’s three components.

The bedab7 email was used to make the purchase, the court was told.

Mr Penny said: “After the explosion, the same email address was found on handwritten torn-up pieces of paper in one of the bins at the Elsmore Road address.

“Translated, ‘bedabjeana’ means ‘To slaughter we have come’, or ‘We have come to slaughter’.”

The pair had allegedly hatched their plot while their parents were in Libya, jurors were told.

In that time, both Abedi brothers had visited a B&Q store in Stockport where their mother’s card was used to buy alleged bomb-making tools, including a claw hammer, hacksaw, metal cutters and pliers at the end of March.

Their older brother Ismail bought them one-way tickets to Libya in mid-April, prompting Hashem and Salman to swiftly remove their bomb-making kit and hide it in a parked Nissan Micra bought on Gumtree, the court heard.

On May 18, just four days before the attack, Salman Abedi returned to the UK alone and finalised his murderous plans.

Chilling CCTV footage showed him walking by the Manchester Arena, retrieving his bomb components and lugging them in a suitcase to a newly rented flat in central Manchester.

Salman Abedi also bought a large money tin, used to contain the bomb, the rucksack to carry it, and nearly £300 worth of metal nuts for shrapnel, the court heard.

After the bombing the Micra was found parked up in the Rusholme area of Manchester, the court heard.

Inside, police found Hashem’s fingerprints, some bags of screws and nails handled by the defendant and more than 10 litres of sulphuric acid in the boot and traces of TATP, the court was told.

Mr Penny questioned why Salman Abedi had ordered more metal nuts online, leaving the nails and screws that had been bought on March 25 in the car.

He said: “Had there not been space for them in the blue suitcase when Salman Abedi had returned to it with the suitcase on the morning of May 19, or were design changes required to the device ultimately to be used?

“What is plain, however, is that the nails and screws bearing the defendant’s fingerprints had been purchased by the two brothers at that time with a view to deployment in a lethal explosion.”

Hashem, originally from Manchester, denies the murder of 22 men, women and children aged between eight and 51.

The trial was adjourned until 10am on Friday.