John Bercow slapped down by Commons authorities over autobiography 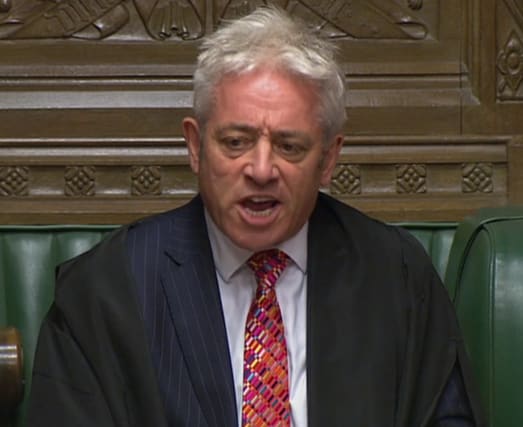 Former speaker John Bercow has been strongly rebuked by the House of Commons authorities for naming members of staff without their permission in his newly published autobiography.

In a highly unusual move, a spokesman for the House said it was “unacceptable” for Mr Bercow to publicly identify current and former staff – particularly for “the purpose of financial gain or commercial success”.

The statement was issued by the Commons media office on behalf of the House Service – the body which employs the Commons staff, from the clerks who organise the House business to catering staff and cleaners.

A spokesman for Mr Bercow strongly defended his actions, saying he was entitled to address “unfounded” allegations made by a small but “highly vocal” group of people who were trying to “blacken his name”.

However the intervention will be seen as a further setback to his hopes of gaining a peerage after stepping down last year from the speaker’s chair.

The former speaker is currently embroiled in allegations by the former clerk of the House, Lord Lisvane, and the former black rod – the senior official in the House of Lords – Lieutenant General David Leakey of bullying staff.

His book, entitled Unspeakable, includes an account of the bullying allegations in which a number of officials are named.

He said the claims – first made public on BBC2’s Newsnight in 2018 – dated back to 2010 when, he said, there was an attempt by senior clerks to take over the running of his office.

He said the then clerk of the House Dr Malcolm Jack and his successor Lord Lisvane (then Robert Rogers) had tried to persuade him to replace two of his “loyal” private secretaries in a shake-up of his office.

The officials they wanted to get rid of were “former state school boys” who had not been to university, he said, while Dr Jack was “every inch the ex-public schoolboy”.

“In retrospect, I wish that I had known that this pitch by the clerks effectively to run the speaker’s office was not the first such attempt,” he wrote.

“It was an old ploy and had been rejected by my predecessors. The clerks wanted both to exert greater influence and to add to the career opportunities for clerks. I should have realised this and rejected it.”

In a statement, a Commons spokesman said that by naming staff in the book, Mr Bercow had undermined the principle that they should be able to provide impartial advice to MPs in confidence.

“House of Commons staff work incredibly hard to enable the effective functioning of our democracy and have a right to expect that their privacy be respected,” the spokesman said.

“It is unacceptable to publicly name current or former staff without their prior knowledge or authority, especially for the purpose of financial gain or commercial success.

“A crucial element of the work of House of Commons staff is to provide confidential, impartial advice to MPs.

“Breaking this confidentiality undermines this important principle and also places staff in a position from which they are unable to respond.”

A second statement added: “In his book, Mr Bercow has chosen to name a number of staff who have never spoken publicly about their experiences or sought to gain publicity as a result.

“We condemn this behaviour and stand by our previous statement on the matter.”

In response, a spokesman for Mr Bercow said: “Given there is a small but highly vocal group of people consistently seeking to blacken his name, it would be odd if Mr Bercow did not comment on their unfounded allegations and the reasons behind them.

“He was advised by speaker’s counsel not to do so in detail while he was in office. He is therefore doing so now.

“If the book had not addressed these issues, he would rightly have been accused of serious omission.

“Critics are entitled to air their views. What they are not entitled to do is to make unfounded allegations and expect Mr Bercow to say nothing in return.”

Mr Bercow has made no secret of his unhappiness that he was not automatically given a seat in the Lords when he retired as speaker, as had been the normal practice.

He has since been nominated by Labour leader Jeremy Corbyn after the Government declined to do so, amid claims ministers remain angry at the role he played in the Brexit debates.

Ministers have, however, said no-one should be given a peerage while they face outstanding allegations of bullying and abuse.