DUP MP calls on Conor Murphy to quit or be sacked 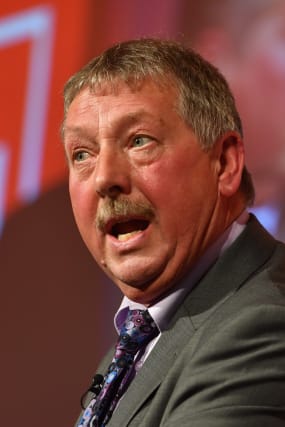 A senior DUP MP has called for a Sinn Fein Stormont minister to quit or be sacked over his controversial claims about an IRA murder victim.

Sammy Wilson’s remarks appear at odds with the DUP leadership, which has stopped short of calling for Conor Murphy’s removal as finance minister.

Mr Murphy apologised on Wednesday for comments made 13 years ago in the wake of Paul Quinn’s murder when he branded the South Armagh man a smuggler and criminal.

The brutal murder of Mr Quinn, and Sinn Fein’s response to it, has become a major issue in the Irish General Election campaign, with rivals claiming it is proof of the party’s continued defence of IRA violence.

Mr Murphy’s apology represented a dramatic change in position as prior to that he had denied even making the comments about Mr Quinn.

Mr Quinn, a 21-year-old from Cullyhanna in south Armagh, was beaten to death by a gang of around a dozen men in a farm shed across the border near Castleblayney, Co Monaghan.

His family blame members of the IRA, but Sinn Fein has long denied republican involvement.

While Mr Quinn’s family and other political representatives have demanded Mr Murphy’s resignation, DUP leader Arlene Foster declined to add her voice to those calls when she appeared before an Assembly committee on Wednesday.

There is a sense the DUP leadership is keen not to destabilise the newly-restored powersharing administration by adopting such a confrontational approach with its main coalition partner.

The controversy has also erupted weeks before the publication of a public inquiry report on the botched Renewable Heat Incentive scheme – an event that is anticipated to place Mrs Foster and party advisers in an uncomfortable political position.

Mr Wilson and several party colleagues now appear to have broken ranks on the issue of Mr Murphy’s future.

On Thursday, he tweeted: “Despite SF’s continual calls for transparency, integrity and accountability, they have once again illustrated that they will always side with the terrorist and not the victim. If they have any decency, Conor Murphy should be required to resign or be sacked.”

His comments follow a similar message on Twitter from DUP MLA Paul Frew, who is chairman of Mr Murphy’s Assembly scrutiny committee.

“The Quinn family have lived through a tortuous period of grief at the tragic loss & murder of their son compounded by the slur, alienated by the Republican movement. If the Quinn family say Conor Murphy should resign, he shouldn’t have time to get his coat.”

Mr Quinn’s parents Breege and Stephen have said Mr Murphy’s apology did not go far enough and have called on him to explicitly state that their son was not a criminal.