Briton on board quarantine ship voices concerns over health monitoring 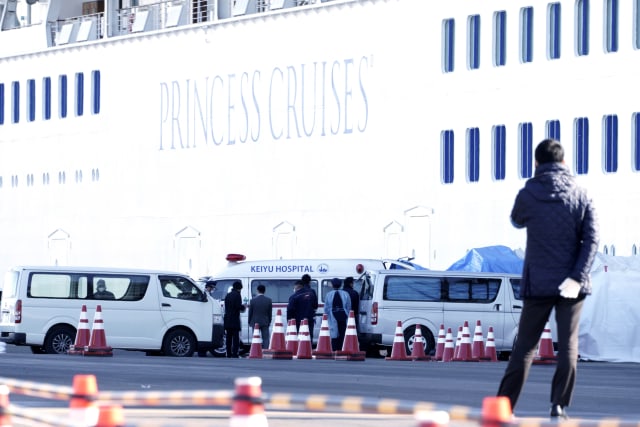 A British man who is among 3,700 people under a coronavirus quarantine on a passenger ship in Japan has voiced concerns over ongoing monitoring for the disease on board and what his fate will be when he returns to the UK.

David Abel, of Northamptonshire, has praised cruise line Princess Cruises for its handling of the situation so far, but said fears remain about efforts to fight the disease on the ship, and what will happen to him and his wife Sally when they eventually go home.

Health workers in the port city of Yokohama said on Thursday that 10 more people on the Diamond Princess had tested positive to the disease, in addition to 10 others on Wednesday when the ship was ordered to be isolated.

As those 20 people received treatment at nearby hospitals and the remaining passengers were confined to their cabins, Mr Abel said medical examinations aimed at detecting new cases on board had seemed to have stopped over the past few days.

"What health checks have we had in the last three or four days, or since the health check when the quarantine officers came on board? None whatsoever," Mr Abel said in a Facebook video post.

"There has been no health check, so we do not know whether there are people on board still who have got symptoms that may have the virus. We do not know.

"So I am now getting a fraction concerned about the health checks that I believe should be taking place, because if there are more infected people on board they should be taken off. We want a virus-free ship."

Mr Abel, who with his wife are believed to be the only two Britons on board, added: "And what happens at the end of this quarantine period? There's no guarantee it's going to be 14 days now. It could be longer.

"And what happens when we finally get back to the UK? Are we going to be put in quarantine yet again for another 14 days?

"These are questions I need answered. I'm going to be contacting the UK Government ... to find out."

Mr Abel said that while food provision for passengers on day one "wasn't good", a day later it was "superb".

He said: "The first day in isolation, the supply of food wasn't good, but considering what they had to put up with, it's taken them 24 hours but now it's superb."

Mr Abel said, however, that due to efforts to stop the disease spreading further through the ship, towels and bedding were not being replaced.

Cleaners were not going into cabins, and no cleaning materials had been distributed to passengers.

"This is not a complaint, I totally get it and I totally understand. The cruise has ended," he said.

"We are in a quarantine situation. It's brand new territory for the captain of this ship and the crew and the ship itself."

While the Abels have an outside cabin with a balcony to allow in fresh air, he said he felt sorry for those passengers in inside cabins.

"The inside cabins are really small, they've got no window to look out of, there's no natural light, there's no fresh air, and they can't take a walk down the corridor," he said.

"But the captain has announced that those people on the inside cabins ... are going to be allowed access on to open deck, for exercise and fresh air. Face masks will be made available to them."

Mr Abel's online video message suggests some American passengers have hung a bed sheet from their balcony that says "USA help us".

Sources have told the PA news agency that the Foreign Office has no plans to fly anyone off the ship and back to the UK at the moment.

The ship is being quarantined for 14 days and FO officials are understood to be in touch with local authorities.

It is thought the Foreign Office has offered support where needed, but is letting cruise ship staff take the lead on managing the situation.

Meanwhile, the death toll from coronavirus rose to 563 on Thursday – all but two of them in China – with the number of confirmed cases rising by 3,694 to 28,018. Some 240 cases have been recorded outside China.

The UK's Foreign Office has urged all British nationals to leave China.
Health Secretary Matt Hancock chaired a Cobra meeting on coronavirus on Wednesday afternoon, after saying the Government is "taking no chances" with British citizens at risk.

He told the BBC the advice to leave was a "science-led approach" based on the severity of the virus and its impact in China.

Meanwhile, NHS hospitals have been told to create "priority assessment pods" for patients with suspected coronavirus in an effort to prevent them mixing with other patients.