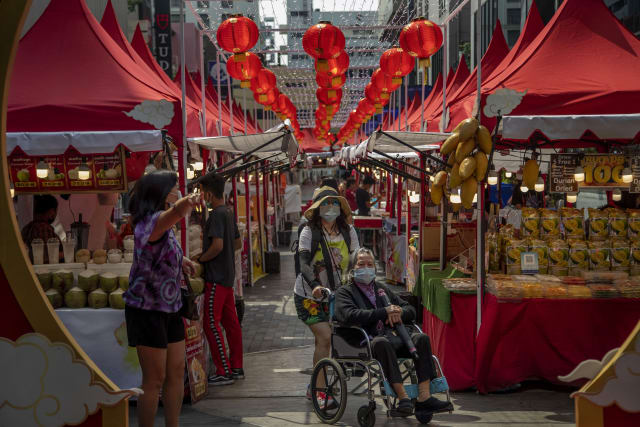 British citizens living in China have criticised Government advice they should leave the country amid fears over the coronavirus outbreak.

Expats say a lack of clarity behind the advice has caused “anguish” within their communities – but many are unwilling to leave their homes and families.

The death toll from the virus has risen to 565, with the number of confirmed cases rising to 28,273.

On Tuesday, the Foreign Office urged all British nationals to leave China if they can — however, Health Secretary Matt Hancock previously said there were “no plans to evacuate all remaining UK nationals”.

Allan Boyd, 33, a senior consultant living in Suzhou with his partner, said he had been planning to leave China but there were “a lot of unknowns”.

He told the PA news agency: “The worry is that controls tighten up and the opportunities to leave will become fewer and fewer. We’re worried opportunities will stop altogether.

“The actual advice to British people isn’t clear. We don’t know why we should leave or what the risk is of staying.”

Mr Boyd, who has lived in Suzhou since 2015, said many British citizens in Suzhou intended to “ride out” the virus.

“People here are confused as to what’s best to do,” he said.

“There are tens of thousands of us here, this is no small thing.”

Deanna Holroyd, 25, an English teacher from West Yorkshire, said: “It’s all well and good the UK Government urging us all to leave but it’s not possible to leave quickly.

“I have an apartment I have to find a subleaser for, I have to take all my money out of my Chinese bank account and close it, and I have to pack all my life up.

“When I found out about the UK Government travel advice, I was on an island in Thailand with only a hand luggage suitcase full of belongings.

“Everything else I own is in Shanghai and I’m just supposed to not go back? I’m taking the risk of going back and staying on house arrest in Shanghai.”

Another teacher, from Manchester, said life largely continues as normal in China.

Christopher Valentine, 26, said: “I was in the UK for two weeks — I saw things were slowly getting worse here in China but I always knew I wanted to return regardless.

“I have a routine here, many friendships, and this is where my employer is.

“I was given a temperature check outside the entrance to my complex yesterday. I was also checked on the highway coming back from Shanghai airport as we approached Suzhou.

“The first reading was higher than expected so we drove to a small area off the road. After it was taken again we were allowed through.”

The 26-year-old, now living in Suzhou, met friends for dinner in a restaurant yesterday: “We were not asked to wear masks, but the tables were sterilised before and after our meals.”

Another expat said he does not plan to leave his apartment to return, deeming it a “greater risk” than self quarantining. Tristan Cotterill from Swindon said: “I am someone who is always prepared. I have two weeks of water in my apartment and about 3.5 weeks of food.”

Jonathan Gerrie, 31, from Manchester and now living in Beijing, said he had been visiting his girlfriend’s family in Huludao for the Spring festival, but now remained “locked away” in the city.

“We had the choice to go back to Beijing this morning but I have contacts high up who told me it’s not safe to go back and to stay where we are,” he said.

“Relatives left 12 hours ago and they still aren’t home. It’s a four-hour drive (back to Beijing) so go figure the number of checks that are going on just to get into the city.”