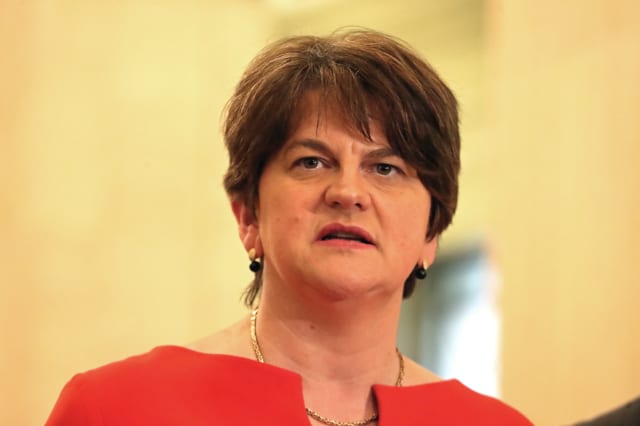 A dissident republican ferry bomb plot is a chilling reminder of the threat posed by the extremists opposed to peace, Northern Ireland’s First Minister has said.

DUP leader Arlene Foster said the potential loss of life that could have been inflicted if the device had detonated on board an Irish Sea ferry did not bear thinking about.

“The discovery of this bomb in Lurgan obviously highlighted once again that there are those in Northern Ireland who still attempt to drag us backwards into terrorism and violence,” she said.

“The potential damage which could have been caused and loss of life either here in Northern Ireland, on board a ferry or in Great Britain do not bear thinking about.

“It is significant that information was available which meant police could search the ferry and ensure it was able to sail safely.

“The disruption of such potential attacks can save lives and we owe a huge debt of gratitude to all those working to keep the public safe and thwart the efforts of terrorists.

“It is vital that information continues to be forthcoming and the police are assisted in efforts to bring anyone responsible for such incidents to justice.”

PSNI Chief Constable Simon Byrne gave members of his oversight body – the NI Policing Board – an outline brief on the incident at their monthly meeting in Belfast on Thursday afternoon.

Afterwards, Sinn Fein’s policing spokesman, Gerry Kelly, said there could have been “catastrophic loss of life” if the device had detonated on board a ferry.

“The fact is this could have ended up on a ferry,” he told the PA news agency.

“If it had exploded, you are talking about catastrophic loss of life, and whoever planted this bomb needs to know that.”

Asked if he believed the attack was timed to coincide with Brexit, Mr Kelly said: “From the detail we have here that’s a possibility, but, whatever the reason, there is no logic around it except to cause death and destruction.

“And to what purpose? There is no purpose and they need to desist and go off the stage and move away from any such actions.”

“This was no minor device, this was a very deliberate attempt to cause an explosion on a ferry, and, given the inherent instability of these devices, it could easily have detonated in the lorry’s yard, on the M1, in the middle of Belfast or on a ferry itself in the middle of the Irish Sea,” he said.

“Without a doubt it was an attempt to isolate Northern Ireland from the rest of Great Britain by creating a threat to on-board ferry traffic.

“Had it exploded on the ferry, it could have created a fireball that would have taken the route of least resistance and spread through open spaces, walkways and corridors to engulf anyone in its path, be they men, women or children.

“Had this been on a ferry from Dover to Calais, the UK Government would be mobilising every asset possible to track down the perpetrators – I call on them to do so with this, and treat it as the national security threat which it is.

“We are dealing with people here who do not give a damn about the safety of anyone else.

“These are the type of fascists who bombed Omagh and who have taken their cue from those (the IRA) who organised the Bloody Friday, La Mon and Enniskillen bombings.”