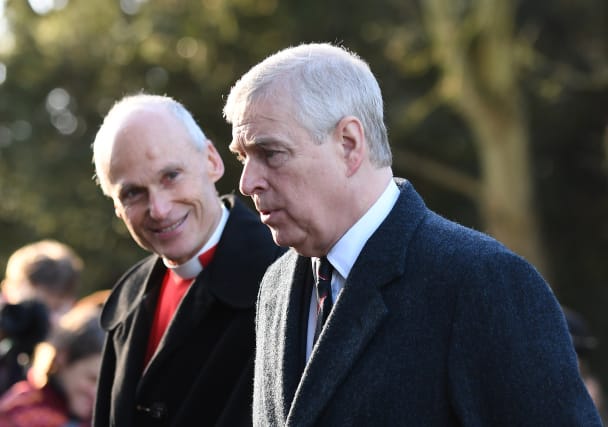 A woman has come forward claiming she saw the Duke of York dancing with his accuser Virginia Giuffre and remembered the encounter because she stepped on the royal's foot.

Lawyer Lisa Bloom, who represents five women who say they were sexually assaulted by Jeffrey Epstein, revealed she has an unnamed sixth client who says she witnessed Andrew with Ms Giuffre in Tramp nightclub in 2001.

Ms Giuffre, previously known as Virginia Roberts, claims she was trafficked by convicted sex offender Epstein and alleges the duke slept with her on three separate occasions, including when she was 17 – still a minor under US law.

Ms Bloom told a press conference in New York that the girl stepped on Andrew's foot by mistake while dancing next to him and a friend pointed out who he was.

She said: "She thought to herself 'oh my God, I'm in the presence of a royal'. It was a very big moment to her.

"She says that she gawked at him because he was a prince.

"After she was done staring at him for quite some time, she looked at who he was with and it was a very young girl about her age.

"And in the photographs that she has seen since, she identifies that young woman, or girl, as Virginia Roberts."

Ms Bloom said the woman came forward because she was "incensed" that Andrew had denied meeting Ms Giuffre in his Newsnight interview.

"Because he is a very powerful person, she is in fear of the repercussions to her," Ms Bloom said, adding she had contacted the FBI on her behalf.

In an interview with BBC Panorama, Ms Giuffre told how she was left "horrified and ashamed" after an alleged sexual encounter with Andrew in London in 2001.

She claimed she danced with him in Tramp nightclub, adding he was "the most hideous dancer I've ever seen in my life" and "his sweat was ... raining basically everywhere".

During his Newsnight interview, the duke said the alleged encounter in 2001 did not happen as he spent the day with his daughter, Princess Beatrice, taking her to Pizza Express in Woking for a party.

He also said he does not recall meeting Ms Giuffre and had a medical condition at the time, after suffering an overdose of adrenaline in the Falklands War when he was shot at, that meant he did not sweat.

Andrew stepped down from royal public life in November after the fallout from his disastrous Newsnight appearance.

He was accused of showing a lack of empathy for Epstein's victims and of failing to show regret over his friendship with the disgraced financier.

Ms Bloom held a joint press conference with a spokesman for the family of Harry Dunn, who are calling for the US to extradite Anne Sacoolas, who was given diplomatic immunity after being charged with causing the teenager's death in a road crash.

Kiki, an alleged victim of Epstein who joined Ms Bloom at the press conference, told how she believed she could have been spared if the duke had spoken out.

"I have a message for Prince Andrew," she said.

"There's no question that you had close ties to Jeffrey Epstein dating back to the 90s.

"Of all people, you had the power to influence and to say something, yet you didn't. Years went by and you didn't."

She added: "I can't help but think I could have been spared and potentially hundreds of other children and young women could have also been spared.

"Now's your chance to speak to the FBI and do the right thing."

The duke has denied witnessing any suspicious behaviour when with Epstein.

The billionaire killed himself while in jail awaiting trial last year.

Kiki said she and Epstein's other alleged victims wrote to the duke asking for his co-operation.

"So far he has not responded and as far as we know he has continued to stonewall," she added.

US lawyer Geoffrey Berman, who is leading the Epstein sex trafficking inquiry, has said the duke has "provided zero co-operation", claiming his lawyers had been contacted by prosecutors and the FBI as part of the investigation.

Andrew was reported to be "angry and bewildered" at the claims, with sources telling the Daily Telegraph he was more than happy to talk to the FBI but had not been approached.

When the monarch's second son quit royal duties, he said he was willing to help any appropriate law enforcement agency.

Kiki called on the Queen to encourage the duke to co-operate.

She said: "I really feel empathetic for the Queen. I can't imagine what she's going through – but I think that they should pressure him to do the right thing because that seems to be what they stand for."