Watch belonging to crew of Apollo 11 for sale 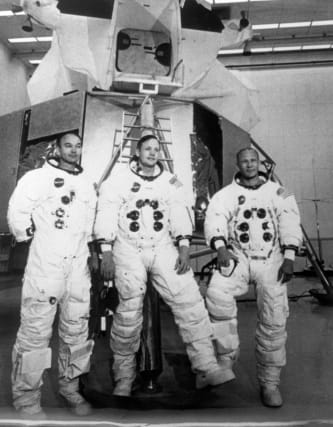 Re-gifted items do not normally capture buyers’ attention at auction.

But when a watch is re-gifted by the Shah of Iran, after receiving it from the Apollo 11 astronauts, collectors take note.

It was first presented to the Shah of Iran in 1969 by the crew of Apollo 11, as they toured the world following their historic first moon landing.

The Shah re-gifted it to his half-sister, Princess Fatemeh Pahlavi, who gave it to Mr White in return for helping her become the first Iranian woman to fly a helicopter.

Mr White, who now lives in Dorset, kept the watch in a safe for many years.

“The Omega is much venerated but hasn’t been seen by many people,” he said.

“It holds lots of good memories for me, but I thought it would be jolly nice if it was worth something. If it sells, I’ll take my wife on a cruise.”

In the late 1960s, former military pilot Mr White, who then worked for Bristow Helicopters, was based in Iran training Iranian military personnel to fly helicopters.

His exploits in evacuating Bristow’s fleet of helicopters from Iran when the Shah was overthrown in 1979 are featured in author James Clavell’s 1986 novel Whirlwind.

Mr White recalled how Princess Fatemeh, who died in London in 1987, would regularly order a Boeing 737 plane to fly from Iran to Denmark to collect supplies of alcoholic drinks.

After the princess first flew solo, she presented him with the watch in his flight school office.

Mr White retired from flying in 1998 due to an eye problem. He returned to the UK recently after living for many years in France.

In 1969, the Apollo 11 astronauts visited 23 countries during what was called the “Giant Leap” goodwill tour, including Iran.

The watch will be sold at auction on February 19 at Gardiner Houlgate in Corsham, Wiltshire.

Auctioneer David Hare said: “As re-gifting goes, this watch is something quite special.

“It’s in lovely condition, and having been associated with the moon astronauts and the Shah of Iran, we anticipate it could fetch as much as £15,000.

“The watch’s presentation to the Shah by the Apollo 11 crew is well documented.

“We also have Mr White’s flight logs and photos from 1969 showing his lessons with Princess Fatemeh.

“It’s an amazing story – like something out of an adventure book.”