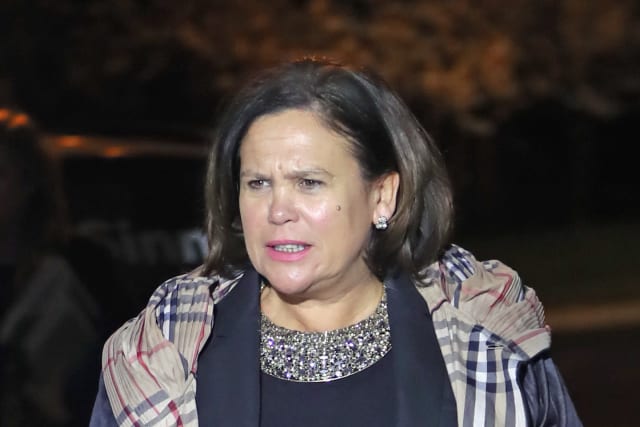 The Sinn Fein president has said she will not ask Conor Murphy to step down over comments he made about a murder victim.

The Minister for Finance in Northern Ireland had alleged that murder victim Paul Quinn was involved in criminality before his death in 2007.

The mother of the IRA murder victim has said she will not meet Mr Murphy until he apologises publicly for branding him a criminal.

Mrs Quinn called on Sinn Fein to fire Mr Murphy as a minister.

“He is not fit to be in government,” she told BBC Radio Ulster’s Nolan Show.

“Mary Lou [McDonald] should just step him down.”

She added: “Has he any idea what we are going through, what he has put us through?”

Sinn Fein president Mary Lou McDonald said on Wednesday morning she would not be asking Mr Murphy to leave his role.

“Absolutely not,” she told the PA news agency.

“Absolutely not, we just got powersharing up and running, and I believe that everyone concerned is determined to make a success of it.

“It’s extremely important for the collective good and stability, so no, there’s absolutely no question of that.”

Ms McDonald added: “Conor has clarified the fact that he is withdrawing his statement, comments he made over a decade ago and he has apologised for them.

“I know that he will be hoping to meet with the Quinn family to talk to them.

“That family have been through a horrible ordeal, I mean I can’t even imagine, to lose their son in such a brutal way.

“Obviously they felt a deep hurt at any suggestion that he was a criminal, to be clear the criminals in this scenario are the people who beat Paul Quinn to death.”

She said: “I think the focus now needs to be in giving the respect due to that family and those responsible for this barbarism have to be brought to justice.

“Conor’s apology is sincere, and I hope the Quinn family take comfort from that and are assured that everybody in every stage are very forceful in saying that the people who took their son’s life need to be brought to justice.

“Let me tell you, if it was my son, I would do as Breege (Quinn) has done and I would not rest until those responsible for his death were brought to justice.”

Ms McDonald said that she believes that anyone who has information about the “barbaric” murder of Mr Quinn should contact authorities.

She added that Mr Murphy had spoken with authorities at the time of the murder but has not done so since and she believes that Mr Murphy will be in contact with the Quinn family in the coming days to pass on his apologies for the remarks.

Mrs Quinn said she would not meet Mr Murphy until he apologises publicly.

“I welcome Mary Lou’s apology last night of saying Paul was not a criminal even though she had kept it up for 13 years,” she told BBC Radio Ulster.

Mrs Quinn said Mr Murphy needed to tell the authorities north and south of the border the names of the IRA members who he said told him the organisation was not involved in the murder.

“We have got the half truth and I thank Mary Lou for her part last night, and Conor Murphy, we are waiting for him to publicly apologise and go to the gardai and PSNI and give the names of the IRA people he said he spoke to in Cullyhanna,” she said.