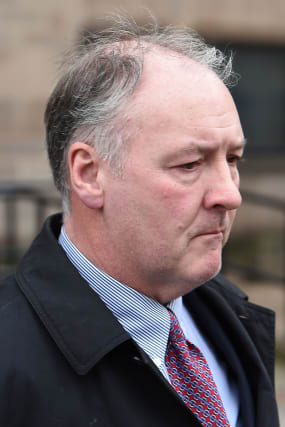 A complaint of sexual assault against rogue breast surgeon Ian Paterson was investigated by police.

The allegation is understood to have come to light during the work of the Paterson Inquiry while it was separately investigating the circumstances that allowed the surgeon to carry out unnecessary operations.

Paterson is serving a 20-year jail sentence after being found guilty in 2017 of 17 counts of wounding patients with intent against 10 victims.

The inquiry’s chairman said the number of patients subjected to unnecessary treatment by Paterson could run to more than 1,000 people.

The inquiry into Paterson’s malpractice was launched by the Government in May 2018.

It published its final report on Tuesday when inquiry chairman the Rt Rev Graham James revealed that a matter arising from the panel’s work had been referred to West Midlands Police.

The force confirmed it received a complaint of sexual assault against 62-year-old Paterson in May 2018 and passed it to Staffordshire Police, who opened an investigation.

The allegation was looked into and the female complainant spoken to by detectives.

Staffordshire Police said the complainant had not wished to pursue the matter, and there were “no further safeguarding issues” as Paterson was already in prison.

The independent inquiry into how Paterson was able to go on performing unnecessary operations for years concluded that a “dysfunctional” healthcare system had failed patients “at almost every level”.

Rt Rev James said “patients were let down over many years” by the NHS and independent providers, and there was “a culture of avoidance and denial”.

Health Secretary Matt Hancock has vowed to introduce improvements within a year.

The consultant surgeon was employed by the Heart of England NHS Foundation Trust (HEFT) but had practising privileges in the independent sector at Spire Parkway, Solihull, and Spire Little Aston, Birmingham.

Concerns about Paterson’s practices were first raised in 2003, but he was allowed to continue working for another eight years – what the Rt Rev James called an “appallingly long time”.

Among the report’s 15 recommendations, the inquiry urged the NHS and private provider Spire Healthcare to make sure more than 11,000 patients treated by Paterson had been recalled.

The Rt Rev James said the panel had also referred five health professionals to the General Medical Council or Nursing and Midwifery Council.

In a statement, West Midlands Police said: “The force received a complaint of sexual assault against Ian Paterson in May 2018.

“After initial consideration the complaint was further referred to Staffordshire Police for investigation.”

A Staffordshire Police spokesman said: “A report of a sexual assault against Ian Paterson was referred to the force by West Midlands Police in May 2018.

“The complainant was visited by detectives in June 2018 and after speaking to her she did not wish to pursue a complaint.

“There were no further safeguarding issues as Ian Paterson was in prison.”

Last month, West Midlands Police said they had asked the senior coroner for Birmingham and Solihull to examine a sample of 23 people who died of breast cancer and had been treated by Paterson.