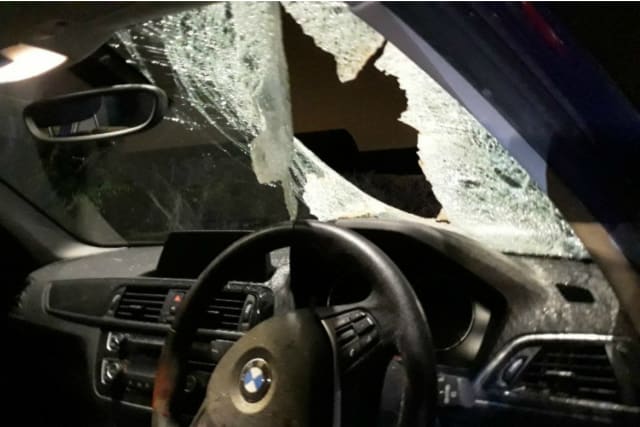 A motorist needed more than 100 stitches after a 10kg tow bar smashed through his windscreen, leaving him permanently scarred.

Jonathan Loates believes he is lucky to be alive after instinctively ducking as the tow bar struck him on the head in north Nottinghamshire last month.

The 30-year-old managed to pull over in his BMW before collapsing, and was helped by a witness who stopped to put clothing over his wound and stayed at the scene until an ambulance arrived.

Traffic officers said the tow bar is thought to have fallen from another vehicle, and are appealing for witnesses or anyone with dashcam footage who was in the area at the time to come forward.

Mr Loates, who is still recovering at home, said: “As I got to the brow of the hill I saw something in the road – I thought it was a bit of wood or some rubbish.

“I went to go round it to the left and the next thing I know there was a massive bang. I can’t really remember what happened after that.

“I don’t know if it knocked me out or I blacked out but the next thing I remember was getting out with my head pouring with blood.”

In a statement issued through Nottinghamshire Police, Mr Loates thanked the driver who stopped, as well an off-duty trainee paramedic who also assisted him.

He was initially taken to Doncaster Royal Infirmary but was later transferred to a specialist head injury unit in Rotherham, where he underwent a three-hour operation.

“I’m lucky it didn’t hit me straight in the head because it would have taken my head off,” said Mr Loates. “The scar is going to be visible for the rest of my life.”

Mr Loates, who works at a recruitment firm near Hucknall, was driving home to Blyth when the incident happened in a 40mph zone on the A619 near Worksop at around 5.15pm on January 9.

Pc Anthony Brice, who is leading the investigation, said he believed the tow bar had fallen off a long wheelbase van, a 4×4 or a scrap van, either travelling ahead of Mr Loates or on the opposite carriageway.

“He’s lucky to be alive. He moved his head a few inches to the side and that saved his life – simple as that,” he said.