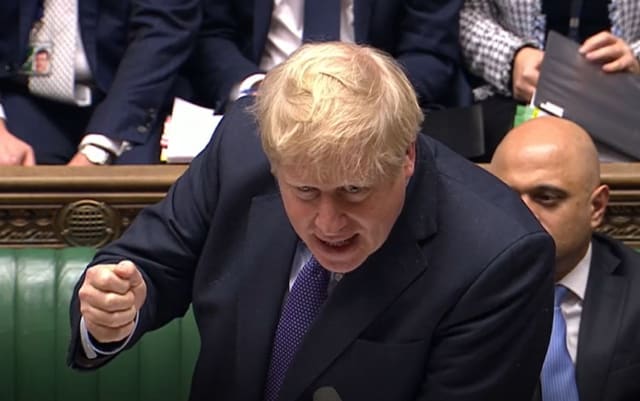 Boris Johnson reacted to claims he was reviving his “climate change denial” beliefs by accusing Labour of wanting to confiscate cars and scrap foreign holidays.

The Prime Minister sought to deflect queries and criticism from Labour leader Jeremy Corbyn as the pair clashed over climate change at Prime Minister’s Questions.

Mr Corbyn raised the sacking of former UK climate and energy minister Claire O’Neill as the president of the COP26 summit, which will be held in Glasgow in November, as he warned the PM is “failing so spectacularly to measure up to the scale” of the climate crisis facing the UK and the planet.

He also noted two former Conservative leaders have also turned down the job, joking “maybe it could be third time lucky” as he suggested former Tory leader Sir Iain Duncan Smith for the role – who shook his head at the suggestion.

Mr Johnson hit back, branding Mr Corbyn’s comments “beyond satire”, adding: “This is the first major economy in the world to have set a target of carbon-neutral by 2050.”

He said: “It’s an absolutely fantastic thing, we are leading the world in our ambitions and we will have a wonderful summit in Glasgow.”

Mr Corbyn quoted Ms O’Neill’s words in the Commons arguing “there has been a huge lack of leadership and engagement from this Government”.

Responding, Mr Johnson said: “If you look at what this Government is achieving and already has achieved on climate change, it is quite phenomenal.”

He dismissed Mr Corbyn’s words, saying: “All he would produce, I’m afraid, is a load of hot air.”

The Opposition leader went on to criticise Mr Johnson’s record on climate change, telling the Commons: “Considering his monumental failure in advance of COP26, isn’t it really just a continuation of his climate change denial statements that he was regularly making up until 2015?”

Mr Johnson said Mr Corbyn was “talking absolute nonsense” and defended the Government’s agenda, adding: “We lead the world in going for a zero-carbon approach. His own approach is utterly unclear and has been condemned by the GMB as a disaster for the UK economy.

“He would confiscate people’s cars and prevent them from having foreign holidays.”

Mr Corbyn countered that the PM has a “very vivid imagination”, adding: “Unfortunately his vivid imagination seems to have taken over from his memory because he might recall saying that climate change is a primitive fear without foundation.”

He later said the PM is “failing on the biggest stage on the most important issue of our time”, before concluding: “When will he face up to the climate emergency and take the action necessary to turn Glasgow into the turning point when this world will stop the levels of pollution and climate change we’re having and go forward to a sustainable future?

“Because his Government’s policies simply don’t take us there.”

Mr Johnson insisted the Government is showing “world leadership” on the issue.