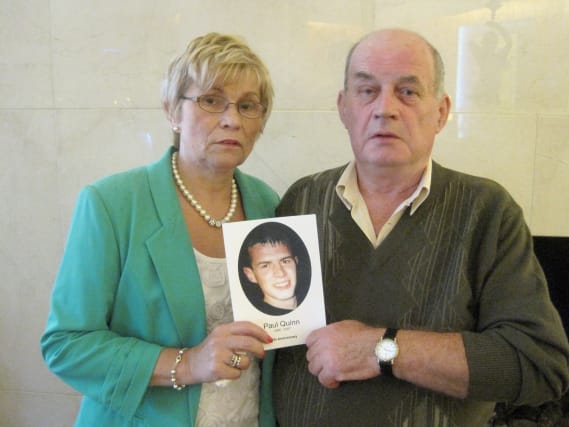 The mother of an IRA murder victim has demanded that Sinn Fein sack one of its Stormont ministers for accusing her son of being a criminal.

Breege Quinn called for the removal of Conor Murphy from his position as Finance Minister after Sinn Fein president Mary Lou McDonald admitted he had been wrong to brand her son Paul a smuggler and criminal.

“He is not fit to be in government,” said Mrs Quinn.

The murder of Paul Quinn 13 years ago, and Sinn Fein’s response to it, has become a major issue in the Irish General Election campaign.

On the last TV debate involving the main party leaders, Mrs McDonald said Mr Murphy had now retracted the comments he made in 2007 and will apologise to the Quinn family.

She said his remarks were wrong and had caused additional hurt and grief to Mr Quinn’s parents.

“Has he any idea what we are going through, what he has put us through?”

She added: “He has no compassion for anybody.

“He is not fit for the job he is in and he was not fit to be an MLA at the time either.”

Mrs Murphy said she would not meet Mr Murphy until he apologises publicly.

“I welcome Mary Lou’s apology last night of saying Paul was not a criminal even though she had kept it up for 13 years,” she told BBC Radio Ulster.

“Conor Murphy still has to do his part, he has to come out publicly and apologise to us, and I mean publicly, on national television, because that is where he put the slur on our son and for 13 years we have endured and cried and fought for justice to get the truth.”

Mrs Quinn said Mr Murphy needed to tell the authorities north and south of the border the names of the IRA members who he said told him the organisation was not involved in the murder.

“We have got the half truth and I thank Mary Lou for her part last night, and Conor Murphy, we are waiting for him to publicly apologise and go to the gardai and PSNI and give the names of the IRA people he said he spoke to in Cullyhanna,” she said.

“We could have justice tonight if Conor Murphy decided to give it to us.

“If he doesn’t do that, I will not be meeting him.”

Mrs Quinn said Mrs McDonald’s remarks had provided some comfort to the family.

“The fact she said Paul was not a criminal, I could go to bed last night and sleep, that gave me comfort – of course it did,” she said.

In a key exchange during Tuesday night’s debate, Mrs McDonald said: “The only criminals involved in this scenario are the people who so cruelly and viciously took his life.

“I have spoke to Conor and he is aware that the comments he made after the murder of Paul Quinn have caused hurt and that that hurt has endured, so he apologised for those remarks, he withdraws those remarks and he will speak to Breege Quinn and the family directly.”

Her comments appeared to run contrary to remarks she made on another RTE interview on Monday night, when she claimed Mr Murphy did not accuse Mr Quinn of criminality.

She told the Prime Time debate on Tuesday that her recollection 24 hours earlier had not been correct.

“Those things should not have been said, Conor withdraws them and apologises,” she said.

“The remarks were wrong, they are withdrawn correctly and will be apologised for directly to Mrs Quinn.

“My sole concern in this is that the family have been hurt and the remarks made need to be withdrawn and apologised for, that’s the correct thing to do and that’s what Conor will do.

“A family that has lost their son in such brutal circumstances doesn’t need the additional hurt and grief of those remarks.”

Mrs Quinn has been demanding that Mr Murphy give the names of IRA members in Cullyhanna he said he spoke to about the incident in 2007.

Mrs McDonald said Mr Murphy had spoken to the gardai and PSNI about the murder, but she did not indicate whether he had passed over any names.