Kirk Douglas: The patriarch of the Douglas dynasty 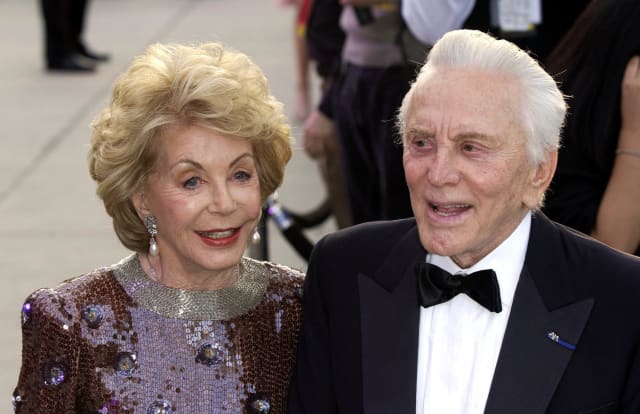 Actor Kirk Douglas has died after beginning a family dynasty as famous for its off-screen developments as any in celluloid.

The Douglas dynasty was established when an overpoweringly physical young actor burst on to the screen alongside Barbara Stanwyck in 1946’s The Strange Love of Martha Ivers.

Douglas starred in dozens of films and was nominated for an Oscar three times, but it was his off-screen performances that caused the greatest stir.

From the mid-1950s he took on the dark side of Hollywood and won, smashing the notorious McCarthyite blacklist.

Douglas was also known to have affairs outside his second marriage to Anne Buydens, who was quoted as saying she was aware of them but “as a European, I understood it was unrealistic to expect total fidelity in a marriage”.

The couple suffered huge personal loss when their youngest son Eric died of an accidental drug and alcohol overdose in 2004.

In 1992 the younger Douglas was admitted to an Arizona rehabilitation facility for 30 days to treat alcoholism and drug addiction.

He attended after an overly-indulgent trip to Majorca with his first wife, Diandra Luker, and Jack Nicholson. On his return, Luker insisted he seek help.

The couple’s son, Cameron, almost had his life ruined by drug addiction and crime.

He enjoyed a wealthy, privileged background – but nothing, it seemed, could prevent his spiral to self-destruction.

He wrote in his memoir that his father – who he “worshipped” – was frequently absent pursuing his film career, and he witnessed his parents’ marriage slowly disintegrating over the years.

The actor started experimenting with drugs as a young teenager. He eventually ended up dealing, committing robberies and carrying a gun, and ultimately spending more than seven years in prison.

Michael married Welsh actress Catherine Zeta-Jones in 2000, after the pair were introduced by actor Danny DeVito the previous year at a French film festival.

Their son Dylan was born the same year, while daughter Carys followed in 2003.

The family-of-four were close with Douglas senior, Zeta-Jones in November sharing a letter her father-in-law wrote to congratulate her on her 19th wedding anniversary.

Cameron was also in regular contact with his grandfather from his base in Los Angeles, just minutes from the patriarch’s home, where the two had spent time together in recent years.