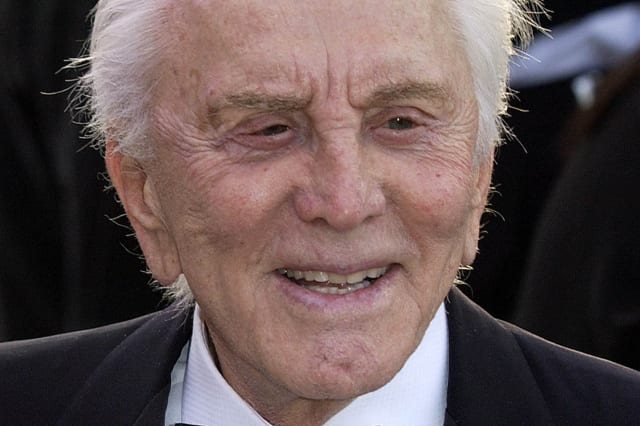 Douglas, best known for films including Spartacus and Ace In The Hole, was one of the last remaining stars of Hollywood's golden age.

He died on Wednesday, according to his son Michael, also a Hollywood actor.

"It is with tremendous sadness that my brothers and I announce that Kirk Douglas left us today at the age of 103," Michael's statement said.

"To the world he was a legend, an actor from the golden age of movies who lived well into his golden years, a humanitarian whose commitment to justice and the causes he believed in set a standard for all of us to aspire to."

Michael, married to Welsh actress Catherine Zeta Jones, said his father was a "wonderful husband" and a "loving grandfather".

He added: "Kirk's life was well lived, and he leaves a legacy in film that will endure for generations to come, and a history as a renowned philanthropist who worked to aid the public and bring peace to the planet.

"Let me end with the words I told him on his last birthday and which will always remain true. Dad- I love you so much and I am so proud to be your son."

Douglas was born Issur Danielovitch in Amsterdam, New York, in 1916 to mother Bryna and Herschel Danielovitch, Jewish immigrants from what is today Belarus.

He endured an impoverished childhood and legally changed his name to Kirk Douglas before joining the US Navy during World War II.

He made his film debut in 1946 noir The Strange Love Of Martha Ivers, opposite Barbara Stanwyck.

Douglas, with his explosive acting style and masculine persona, soon established himself as a Hollywood leading man and throughout the 1950s starred in serious dramas, westerns and war movies.

His first best actor Oscar nomination came for his role in 1949 boxing drama Champion, while his second was in recognition of his part in 1952's The Bad And The Beautiful, in which he starred opposite Lana Turner.

His third followed for the 1956 biopic Lust For Life, in which he portrayed Vincent Van Gogh.

But it is for 1960 historical epic Spartacus for which Douglas is best known.

He partnered with the then relatively unknown director Stanley Kubrick to play the leader of a slave revolt in ancient Rome.

Spartacus features one of the most quoted scenes in cinema. Towards the end of the film the captured slaves are told to identify Spartacus in exchange for leniency – they respond by all claiming to be Spartacus, sealing their own fate.

It is a scene that has been endlessly imitated and parodied, most notably by Monty Python's Life of Brian in 1979.

The Douglas family is a Hollywood dynasty. Michael, 75, is a two-time Oscar winner known for films including Wall Street, Basic Instinct and Fatal Attraction.

During Michael's Hollywood Walk Of Fame ceremony in November 2018, a proud Douglas watched on from his wheelchair.

The father and son shared a poignant moment and a kiss shortly after Michael's star was unveiled.

During the ceremony, Michael turned to his father and said: "I know, no son of yours is celebrating his 50th anniversary in the business, it means so much to me Dad that you're here today.

"I thank you for your advice, your inspiration and I'll say it simply with all my heart, I'm so proud to be your son."

Douglas was awarded an honorary Oscar in 1996 while the American Film Institute placed him number 17 on their list of the greatest male screen legends of classic Hollywood cinema.

He narrowly survived a helicopter crash in 1991 and suffered a stroke in 1996, following which he lived with a renewed focused on spirituality and religion.

Douglas, a father of four, is survived by his second wife, Anne Buydens, who he married in 1954.