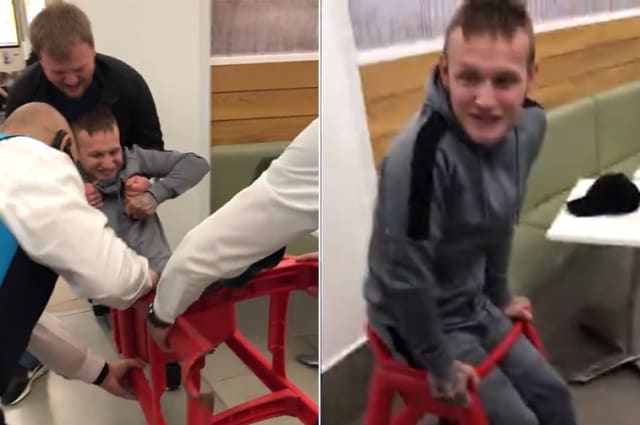 This hilarious video shows the moment a 21-year-old man had to be rescued - from a child's high chair.

It took three people - who were all laughing uncontrollably - to pull Jamie Brammah out of the chair when he became stuck after a pal made him a bet he could not fit in it.

Jamie, a carer from Barnsley, was at Meadowhall Shopping Centre in Sheffield with his pals to watch the BAFTA-winning war film 1917.

But the group had arrived two hours early and went to the food court to kill some time before the film started.

Jamie's pal Luke Jackson said he would buy him a strawberry milkshake from McDonald's if he could fit in the toddler's high chair.

Jamie obliged - but ended up getting stuck, much to the delight of his mates who were on hand to film the hilarious moment.

Luke, a HGV driver, said: "He was thirsty and didn't have much money on him so I said I would buy him a strawberry milkshake if he could fit into the high chair."

Luke and the staff members took care not to hurt Jamie, whose legs were bruised in the incident.

Luke, 22, added: "The security said we've got to stop messing about, but they were laughing their heads off, it was so funny."

"We were still laughing about it the next day."

"We thought at one point we might not have been able to get him out and they would have had to have called the fire brigade to cut him free."