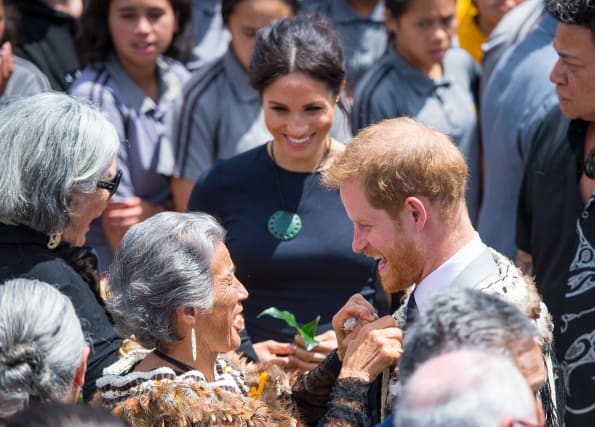 The Duke and Duchess of Sussex have shared a series of images from their royal visit to New Zealand on social media to mark Waitangi Day.

Harry and Meghan, who have begun a new life in Canada after deciding to give up royal duties for financial freedom, posted pictures on their official Instagram account in celebration of the national day of New Zealand.

The pair visited the Commonwealth country in 2018, as part of their first royal tour as a married couple.

It was at the beginning of the official tour, which also took in Australia, Fiji and Tonga, in October 2018 that Kensington Palace announced the couple were expecting their baby son Archie.

The post on the official sussexroyal account read: “To all of our Kiwi followers, sending our very best to each of you on Waitangi Day!

“As a commonwealth country and a realm, today we honour the spirit and diversity of New Zealand, and we feel particularly reminded of the special time we had there during our tour in 2018.

“The Duke and Duchess send their best wishes to all the people of New Zealand.”

They then extended their warm wishes with a sentence written in Maori, the language of New Zealand’s indigenous population.

One of the pictures posted shows Harry wearing a traditional Maori cloak, called a korowai, during a visit to Te Papaiouru, a meeting house in Ohinemutu, in Rotorua, while another shows the couple watching a welcome ceremony.

The Duke and Duchess of Cambridge also shared photos from their own royal visit to New Zealand in their post on Instagram.

Writing first in Maori and then in English, William and Kate’s official page said: “Today marks New Zealand’s national holiday #WaitangiDay‬ ‪Sending our best wishes to all of our followers in New Zealand.”

The official Instagram page for the Queen and members of the royal family also shared a message in Maori, alongside a series of pictures of the monarch in New Zealand.

One showed the Queen welcoming New Zealand’s national rugby team, the All Blacks, to Buckingham Palace in 2007.

“The national holiday commemorates the signing of the Treaty of Waitangi, widely consider to be the document which founded modern New Zealand.”