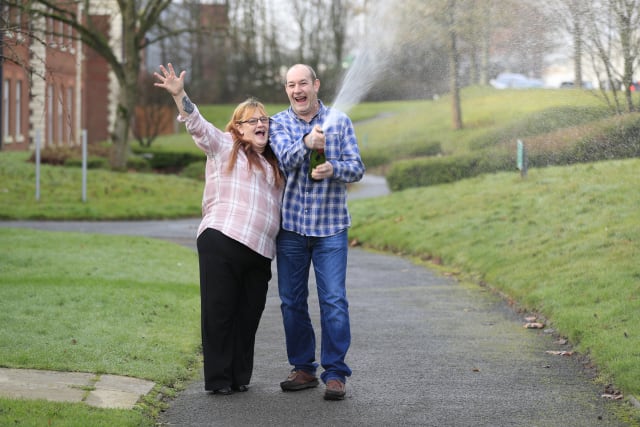 Grandparents who scooped £1 million on the lottery are planning to spend their winnings on a pair of new knees.

Malcolm and Bev Dixon, from Leigh, Greater Manchester, initially thought they had won £1,000 before realising they were in line for £1 million after matching five numbers and the bonus ball in the Lotto draw on Wednesday January 29.

Top of the shopping list for the couple, who have 13 grandchildren, are new knees for Mrs Dixon, 50.

Mr Dixon, 43, said, “This win couldn’t have come at a better time. Bev is in constant pain with her knees so this will definitely be the first big spend.

“Your health is so important – the win will enable us to afford to give Bev a totally new lease of life.”

The couple, who celebrate their 12th wedding anniversary on Sunday, are also planning to move out of their rented home and buy a house.

Mr Dixon, who had to give up work as a building engineer due to injury, said he was out walking their two dogs when he remembered to check his lottery tickets.

Thinking they had won £1,000, he texted Mrs Dixon, landlady of the Railway Tavern in Leigh, to share the good news.

He said: “She was absolutely over the moon. I then thought I would just double-check this was right – I could not believe it!

“It was only when I went to check for a second time that I saw all of the zeros.

“I was just in a state of shock. I immediately called Bev again and said ‘I’ve got it wrong, we have in fact won £1 million’.

“She just thought I was joking and said ‘No, that can’t be right!’ It was a surreal moment and one which I’ll never forget.”

Mrs Dixon now plans to take early retirement and the pair hope to move closer to their three children and their families.