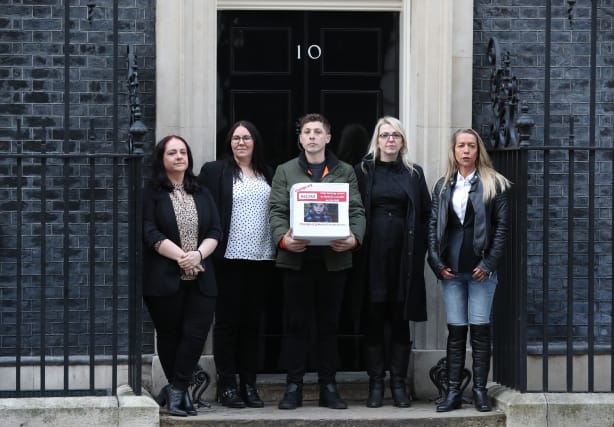 Families with severely epileptic children say they continue to be denied NHS prescriptions for medical cannabis despite a law change in 2018.

Parents claim they are having to pay more than £2,000 each month to have “full-extract” cannabis treatment legally imported to the UK through private prescriptions.

Some parents fear they will be unable to continue the treatment, which they say significantly reduces the number of seizures.

More than a dozen families and campaigners gathered at Portcullis House in central London on Wednesday to put pressure on the Government to ensure the medicine is prescribed.

A change in the law in 2018 made it legal for doctors to prescribe medicinal cannabis, but many doctors have been reluctant to do so, citing a lack of clear guidance on prescribing and issues over funding.

Peter Carroll, director of the End Our Pain campaign group, said: “This is a national scandal, and a cruel one at that. These families have children with intractable drug-resistant epilepsy.

“The NHS trusts seem to be saying that the Nice (National Institute for Health and Care Excellence) are the problem, and Nice are saying that their guidance doesn’t prevent NHS prescriptions.”

He said families had faced “delay, obstruction and outright refusal by the NHS” to prescribe the medication.

Mr Carroll said the campaign group is planning to take legal action with a judicial review against Nice and an NHS trust, which he refused to name.

Rachel Rankmore, 44, from Cardiff, told the PA news agency she pays £2,300 per month for a private prescription of full-extract cannabis medicine for her 18-year-old son Bailey Williams, who has an intractable form of epilepsy.

She said: “Bailey was having hundreds of seizures a day and was confined to his bed, but now he only has a handful. He has had an incredible improvement in his quality of life.”

The full-time carer claimed she had been told by NHS doctors they would not prescribe the medication “as there was not enough clinical evidence” about it.

“It is a huge financial strain for us and the money for the private prescription runs out in April,” she said.

In November, NHS England said access to Epidyolex, which contains only the CBD extract, had been fast-tracked to be available from January 6 this year.

The medicine was recommended for use on the NHS to treat two rare types of epilepsy, Lennox-Gastaut and Dravet syndromes.

Another cannabis-based medicine, the Sativex spray, was recommended for muscle spasms in people with multiple sclerosis (MS).

Earlier on Wednesday, Health Secretary Matt Hancock denied lying to a mother who was seeking cannabis-based medication for her son.

Joanne Griffiths said Mr Hancock told her last March the drug would be available “in several months’ time on the NHS”, but she added: “We’re nearly 12 months on and we still don’t have that prescription.”

Asked on BBC Breakfast if he had lied, Mr Hancock said: “No, I met her and many other parents whose children benefit from these cannabis-based drugs.

“There was then a report from the National Institute which decides what is paid for on the NHS that came out exactly as she said a few months after our meeting, and that report said that the costs that are being charged by the companies are too high.

“Since then I’ve been working incredibly hard to try to get these drugs available on the NHS.”

A Department of Health and Social Care spokesman said: “We continue to work hard with the health system, industry and researchers to improve the evidence base for other cannabis-based medicines.”

It found a lack of evidence regarding their use in the management of chronic pain and said people with chronic pain should not be prescribed drugs containing THC.

It also said more research was needed on cannabis-based medicines to treat forms of epilepsy other than Lennox-Gastaut and Dravet.