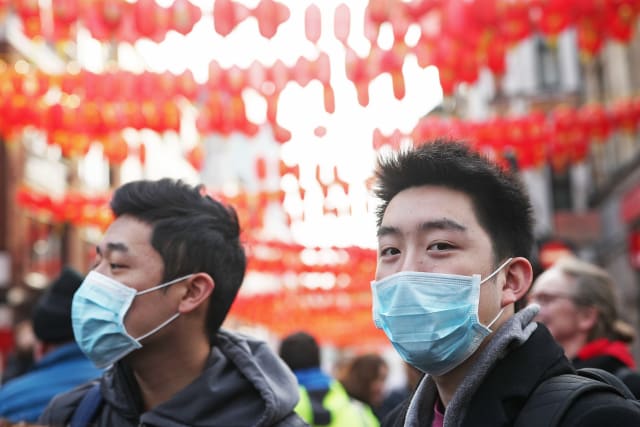 The World Health Organisation (WHO) has issued a global appeal for £520 million in donations as it seeks to combat the spread of coronavirus.

A preparedness and response plan has been launched by the WHO, which is requesting the sum in order to support countries with weaker health systems.

It is understood that the British Government is currently considering its contribution, while the Irish Government pledged half a million euros (£425,000) to the WHO, who is spearheading the international response.

It comes after the Foreign Office urged all British nationals to leave China on Tuesday, after the outbreak continued to claim lives.

Health Secretary Matt Hancock chaired a Cobra meeting on coronavirus on Wednesday afternoon, after saying the Government is “taking no chances” with British citizens at risk.

He told the BBC that the advice to leave was a “science-led approach” based on the severity of the virus and its impact in China.

Hospitals have been told to create “priority assessment pods” for patients with suspected coronavirus in efforts to prevent them mixing with other patients.

According to letter from Professor Keith Willett, NHS strategic incident director for coronavirus, the pods are expected to be up and running no later than Friday.

On Tuesday evening, eight British nationals and their dependants left the virus-hit city of Wuhan on a flight to Auckland, New Zealand.

Diplomat Danae Dholakia said the Air New Zealand flight was delayed to allow the final passenger, a four-year-old British child, to get clearance to fly.

Paul Maloney, who works for the British Council in China, praised the British Embassy in Beijing for getting his family, including his young son Theo, an emergency passport in order to travel.

The UK Government will charter a final flight from China to bring British nationals back to the UK in the early hours of Sunday morning local time, which is scheduled to land at RAF Brize Norton.

The PA news agency understands that 165 Britons and their dependants remain in Hubei province, the epicentre of the outbreak, while 108 people have requested assistance to leave as of the early hours of Wednesday.

A total of 94 UK nationals and family members have already been evacuated to Britain from Wuhan on two flights which arrived on Friday and Sunday.

The death toll from the coronavirus outbreak continues to rise with Chinese authorities reporting 490 victims and an increase in the number of cases to 24,363.

Also in China, the Global Times newspaper reported that a newborn baby in Wuhan has been diagnosed with coronavirus, leading medical experts to suggest the virus can somehow be transmitted between mother and baby.

Mr Hancock said two patients confirmed to have the virus in the UK remain in quarantine, while a Briton has tested negative after falling ill on a flight back from China.

In Japan, nearly 3,000 passengers, including two Britons, were quarantined on board a cruise ship after 10 passengers tested positive for coronavirus on Wednesday morning local time.

Among those stuck on the Diamond Princess cruise ship Yokohama Bay, near Tokyo, are David and Sally Abel.

Mr Abel, of Woodford Halse in Northamptonshire, told BBC Radio 4’s World At One that they were similar to “being prisoners” as they are not allowed to leave their cabin.

The ship is being quarantined for 14 days and there are no plans to fly people back to the UK at the moment.

The Department of Health said on Wednesday that 468 people in the UK have now tested negative for coronavirus.

Of almost 1,500 people who arrived on direct flights from Wuhan in January, all have either left the UK or are now outside the 14-day incubation period for the virus.

The WHO said it is still early in the outbreak, but coronavirus does not yet constitute a pandemic.