China-Manchester flights suspended due to coronavirus 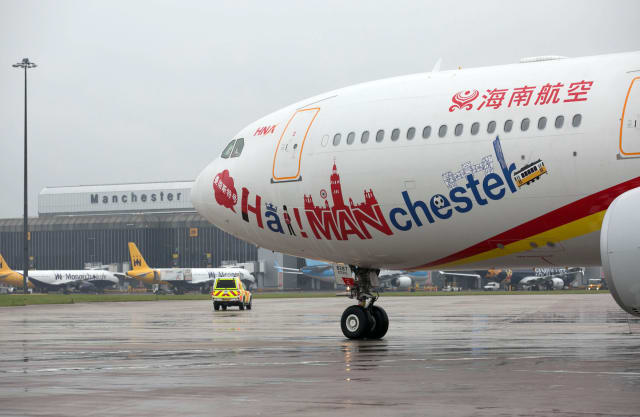 Flights between mainland China and Manchester have been grounded because of the coronavirus outbreak.

Hainan Airlines has halted its three-times-a-week Manchester-Beijing route amid growing concern about the spread of the virus.

A spokesman for Manchester Airport said the airline has suspended its flights until March 28.

The last flight for more than a month took off from Manchester on Tuesday.

The only two UK airlines serving China – British Airways and Virgin Atlantic – have previously cancelled their flights due to the outbreak.

But China’s three main airlines are continuing to serve the UK, providing possible routes home for British nationals wanting to follow the Government’s advice to leave the country if they can, to minimise their risk of exposure to the virus.

Air China is operating flights from Beijing to Heathrow and Shanghai to Gatwick.

China Eastern is still flying from Shanghai to Heathrow, while China Southern is running services from Guangzhou to Heathrow.

Analysis by the PA news agency of air fares showed a seat on the Air China flight from Shanghai to Gatwick on Thursday could be bought for just under £400.