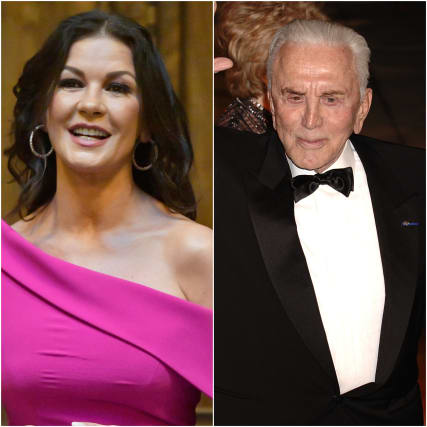 Catherine Zeta Jones has led the tributes to her father-in-law Kirk Douglas after the Hollywood star died at the age of 103.

Douglas, one of the last surviving members of Hollywood’s golden age, was the patriarch of an acting dynasty and known for films including Spartacus, Ace In The Hole and Champion.

His death in Beverly Hills on Wednesday was announced in a touching message from his oldest son Michael Douglas, a two-time Oscar winner and screen great in his own right.

The 75-year-old said in a statement that while the world saw him as a storied actor, to the Douglas family he was a father, a loving grandfather and a wonderful husband.

Welsh actress Zeta Jones married Michael in 2000 and the couple have two children. She regularly posted touching messages to Douglas and shortly after his death paid tribute to “my darling Kirk”.

Alongside a black-and-white picture showing her kissing him on the cheek, Zeta Jones wrote: “I shall love you for the rest of my life. I miss you already. Sleep tight…”

A host of other Hollywood stars rushed to add their own tributes. Mark Hamill, best known for playing Luke Skywalker in the Star Wars films, said Douglas was one of the biggest stars of all time and “a brilliant actor with an unforgettable, blazing charisma”.

Hamill added: “He will also be remembered for putting his career on the line by defying the Hollywood Blacklist, hiring writer Dalton Trumbo for the classic Spartacus.”

“Kirk retained his movie star charisma right to the end of his wonderful life and I’m honoured to have been a small part of his last 45 years,” Spielberg said in a statement to the Hollywood Reporter.

“I will miss his handwritten notes, letters and fatherly advice, and his wisdom and courage – even beyond such a breathtaking body of work – are enough to inspire me for the rest of mine.”

Mitzi Gaynor, who starred alongside Douglas in the 1963 film For Love Or Money reflected on their time working together.

She tweeted: “Bravo Kirk Douglas on an incredible life. Thank you for so generously sharing your amazing talent with all of us. The film we made together will always hold a special place in my heart. My love to Anne & your beautiful family.”

Rob Reiner, the celebrated director of films such as A Few Good Men, called Douglas an icon.

“Kirk Douglas will always be an icon in the pantheon of Hollywood,” he tweeted. “He put himself on the line to break the blacklist. My love goes out to my friend Michael and the whole family.”

“Condolences to the family of Kirk Douglas. What an incredible icon he was in this industry!,” Shatner said.

Actor Danny DeVito was upbeat in his reflection of Douglas’ career, tweeting: “Kirk Douglas. The inspirational Scalawag. 103 years on this earth. That’s got a nice ring to it! Great hanging with you man.”

Seinfeld actor Jason Alexander tweeted: “Heartbroken. Kirk Douglas was a friend and an absolute legend of a star and human. He got better with every passing day. So honoured to have known him. My love to his family. We could use a true Spartacus.”

And the Academy, which nominated Douglas for three Oscars and awarded him an honorary gong in 1996, said in a tweet he was a “Hollywood legend”.