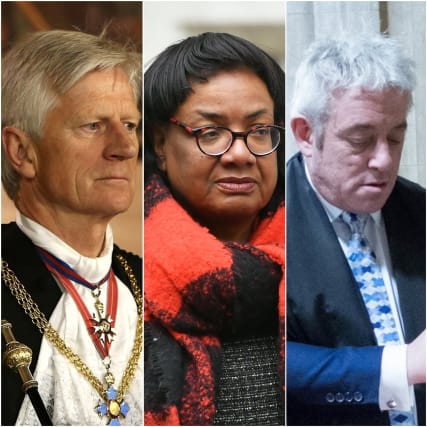 Diane Abbott has been criticised by a union boss, party colleagues and military charities after she suggested it was unlikely a former general could have been bullied by John Bercow.

The shadow home secretary came to the defence of the former speaker, who has been involved in a public row with Lieutenant General David Leakey, who held the post of black rod in Parliament.

Ms Abbott claimed Lt Gen Leakey’s extensive military service meant it was unlikely he could have been bullied by Mr Bercow.

In a Twitter message she subsequently deleted after a backlash, Ms Abbott said: “He had been a Lieutenant General who served in Germany, Northern Ireland and Bosnia.

“But claims he was bullied (i.e. intimidated and coerced) by John Bercow. Unlikely.”

Lt Gen Leakey has submitted a formal complaint against the former speaker “highlighting his bullying behaviour towards a number of parliamentary staff, including myself, over a period of years”.

Mr Bercow has strenuously denied the claims against him.

Dave Penman, general secretary of the FDA union which represents senior civil servants, mocked Ms Abbott’s comment and said she had a “complete failure to understand” the abuse of power in the workplace.

“What a ridiculous comment from an experienced MP, demonstrating blind political partisanship and a complete failure to understand how power is abused in the workplace.”

Lt Gen Leakey, who served as black rod until 2018, stood by his claims that Mr Bercow “brutalised” staff after the former speaker dismissed them as “total and utter rubbish”.

A spokesman for military charity Help For Heroes said: “While our servicemen and servicewomen perform heroic acts to keep us safe, this doesn’t make them superhuman.

“The idea that veterans are immune from bullying is a damaging misconception about many who may have endured more than most.”

Retired wing commander Dr Walter Busuttil, consultant psychiatrist and medical director at the charity Combat Stress, said: “We are very disappointed that an MP suggests that a veteran cannot be bullied or intimidated.”

He added: “At Combat Stress we commonly see veterans who have mental health problems due to being bullied in the military or even after their service.”

Labour MP Dan Jarvis, a former Parachute Regiment officer, said: “Having a distinguished service record does not preclude you from being a victim of workplace bullying.

“All of us in the labour/trade union movement have a responsibility to create a climate where people can voice their concerns and not have their experiences dismissed out of hand.”

A spokesman for Labour leader Jeremy Corbyn said: “If Diane deleted her tweet I think that probably indicates that she had concerns that it might be misinterpreted and so she probably thought better of it.

“As a matter of course, all allegations of bullying and harassment should always be taken seriously and investigated and I’m sure Diane agrees with that.”