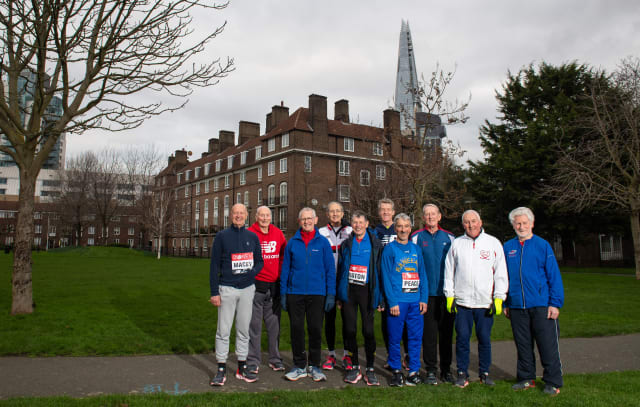 It is a club which cannot admit new members and one where the current members rarely see each other.

The Ever Presents are 10 men who have run every single one of the 39 London Marathons but usually just meet for a quick hello before they head to the start line.

They used to meet up in a pub afterwards but that has become more difficult now their finish times vary from less than three hours to more than seven.

But the 10 of them spent a rare day together on Tuesday, gathering at the London Marathon offices before they attended the launch at Tower Bridge – the route’s halfway point – for the landmark 40th race.

There they were presented with Spirit of the London Marathon medals by event director Hugh Brasher who later invited them on stage at Tower Bridge in front of an audience including famous faces such as broadcasters Sophie Raworth and Jenni Falconer and Olympic champion rower turned Strictly dancer James Cracknell.

“Thirty-nine years ago nobody thought it would get to what it has,” said Jeffrey Aston, 72, a retired IT consultant, from Cardiff.

David Walker, 74, a self employed training consultant, from Chesham, Bucks, said the first London Marathon in 1981 was “a big unknown”, while Mr Aston remembered the idea was “exciting”.

Bill O’Connor, 74, from North Finchley, added: “The highest buildings in London at that time were probably St Paul’s Cathedral and the BT tower.

“Canary Wharf went up after the first London Marathon.”

Roger Low, 76, from Camden Town, north London, who works part time in investor relations, said “there was nobody there” on the section of the route round the Isle of Dogs.

Mr Aston agreed: “You could run and see nobody.”

Mr Low said runners are now supported the whole way round “by people clapping and saying ‘come on'”.

“The change is from effectively running by yourself and today you are surrounded by people all the time.”

Mr Walker added: “I wear my Ever Presents vest and people say I’ve heard about you guys. They are with you.”

The men all have their own anecdotes from their 39 marathons.

When the event was sponsored by Mars, Mr Walker decided to eat about six king size bars the day before in an attempt to carb load for energy.

“Around mile 22 I realised chocolate is a laxative,” he said.

Mr Aston said Deep Heat once used an advertisement mentioning the 765th finisher and gave him a year’s supply and a certificate when he was placed 765th.

And Mr O’Connor’s streak of London Marathons was nearly interrupted after he was attacked by a golden retriever during a run in Totteridge, north London, on August 10 2016.

“It jumped up and took a chunk out of my arm,” said the teacher at Queens Park Community School, north west London.

The horrific wound to his right arm needed 100 stitches and was repaired with a skin graft from his thigh which meant he couldn’t do more than walk slowly for five months.

“I just sat in a chair basically,” he said, adding: “It didn’t put me off running or dogs.”

All 10 Ever Presents hope to stay in the exclusive club by finishing on April 26.

Mr Aston said: “You know it’s going to be a painful experience but still you want to do it.”

Mr Low added: “I spend twice as much time on my feet as I used to.”

“I don’t feel any sense that this is a big deal. I’m looking forward to it,” said Mr Walker.