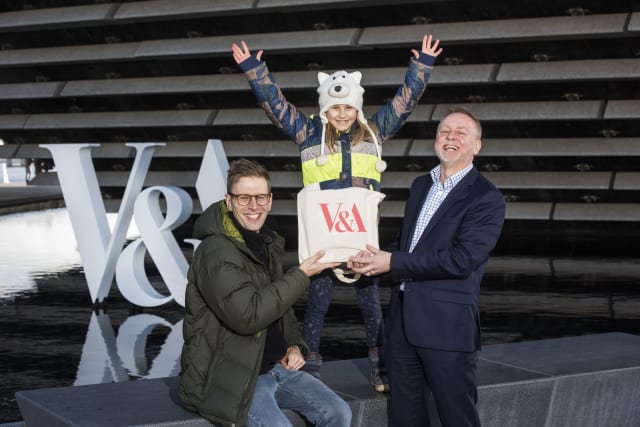 The V&A Dundee has welcomed its one millionth visitor, less than 18 months after it opened.

Nalani Becker, seven, from Berlin arrived at the museum at 11.04am on Tuesday with her father Jan while her mother was working at the University of Dundee.

To mark the moment, Nalani and her father were presented with a gift bag that included Hello, Robot exhibition tickets, afternoon tea in Tatha Bar and Kitchen and a £100 voucher to spend in the museum shop.

Philip Long, director of V&A Dundee, said: “I am thrilled that today we have welcomed our one millionth visitor, just over 500 days after opening the doors of Scotland’s first design museum.

“We have a hugely exciting year ahead, with the last chance to see our UK-exclusive exhibition Hello, Robot this weekend and our first major fashion exhibition Mary Quant opening in April.

“I would like to thank everyone who has helped to create V&A Dundee and who continues to support its incredible success.”

Recent research found the V&A Dundee had a £75 million economic impact across Scotland in its first year after opening,

The museum is showing Hello, Robot. Design Between Human and Machine until Sunday. It has never been shown in the UK before.

This will be followed by V&A Dundee’s first major fashion exhibition, Mary Quant, from April 4 2020 and Night Fever: Designing Club Culture from October 31 this year.

Dundee City Council leader John Alexander said: “This is another tremendous achievement for V&A Dundee and the city.

“Our stunning museum is now very firmly part of the cultural fabric of Dundee, with its design galleries and exhibition programme attracting locals and visitors alike.

“It has raised Dundee’s international profile and played a key part in securing record-breaking tourism figures.

“V&A Dundee is helping to create jobs and new economic opportunities for the city.”

Culture Secretary Fiona Hyslop said: “I’d like to congratulate V&A Dundee for welcoming its one millionth visitor, an impressive achievement and a sign of the museum’s strong appeal to visitors from around the world.

“The museum, built with the help of £38 million in Scottish Government funding, has already more than proved its cultural value, far exceeding expectations for visitor numbers and improving Scotland’s status as a prime destination for world-class cultural experiences.”