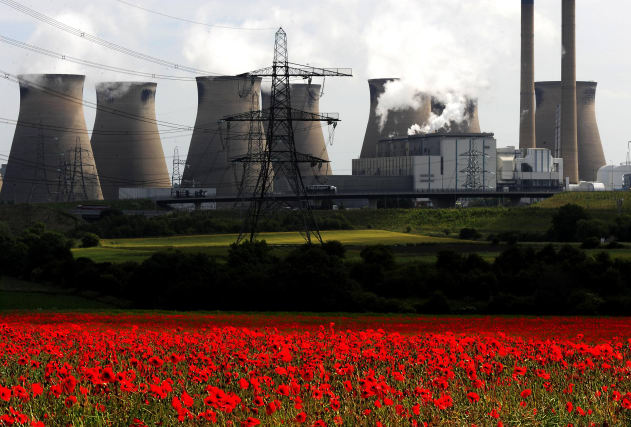 The overall drop was mainly down to another fall in emissions from energy supplies, 7% down on 2017’s figures due to continued reductions in coal and gas for power.

Since 1990, energy generation emissions have fallen by more than three fifths (62%) to help drive an overall reduction in UK greenhouse gases of 43%, data from the Business and Energy Department show.

Emissions from transport, mainly road vehicles as well as railways, domestic flights, shipping and fishing, were down 1% in 2018, the first fall in greenhouse gases from the sector since 2013.

But since 2016 transport has been the biggest source of pollution in the UK, accounting for 28% of overall emissions, now a significantly larger share than the 23% from energy generation.

Emissions from transport have only fallen 3% between 1990 and 2018, the latest year for which figures are available.

The latest figures were released as the Government announced plans to bring forward a ban on the sale of new petrol and diesel cars and vans to 2035, five years earlier than previously proposed, to help tackle emissions from vehicles.

The plans were announced as the Prime Minister held an official launch for the UN climate COP26 talks which are taking place in Glasgow in November, pledging the UK would lead the way on tackling climate change.

The Government said the UK had cut its emissions by more than 40% since 1990 while the economy grew by three quarters.

Business and Energy Secretary Andrea Leadsom said: “These figures demonstrate the extraordinary progress the UK has made in cleaning up its emissions while growing the economy and creating thousands of green collar jobs.

“We’re going even further during this year of climate action and will be setting out plans to cut emissions across the whole of the economy.”

The figures also show that colder weather in the first part of 2018 saw emissions from homes rise by nearly 4% as households cranked up the heating.

With 85% of homes heated by gas boilers, emissions from household heating  are another area where action is needed to help get the UK on track to end its contribution to global warming by 2050.

Residential emissions account for 15% of the UK’s total greenhouse gases, the figures show.

They also reveal a 2.5% drop in emissions from the business sector, due to reductions from industrial combustion, refrigeration, and air conditioning.

And emissions from industrial processes were down by 7.3%, with reductions from the production of ammonia, halocarbons, iron and steel.

Greenpeace executive director John Sauven said the figures showed the need for “more action and less talk from the Government”.

He said the main driver for emissions reduction was coal, while the transport sector was pumping out as much greenhouse gases as 30 years ago and emissions from housing were going up.

“And the carbon footprint from the goods we import isn’t even factored in,” he warned.

“If Boris Johnson really wants the UK to lead on the climate, we need to see some action, and fast.”