UK has responsibility to lead climate action, PM says after attack on record 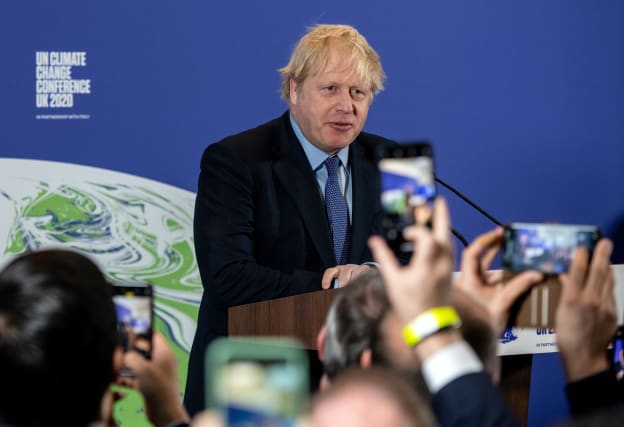 The UK must take the lead tackling the climate crisis, Boris Johnson said as he launched a crucial summit following an attack by the event’s sacked president.

The Prime Minister said he wants to see every country following the UK’s lead in setting “credible” targets to reach net-zero emissions at the UN COP26 summit in Glasgow in November.

But at a launch event at the Science Museum in London, Mr Johnson refused to answer questions about who will replace former clean growth minister Claire O’Neill as president of the talks.

Ms O’Neill spoke out as the Government unveiled plans for the ban on sales of new petrol and diesel vehicles to be brought forward to 2035, as part of the launch of the climate talks.

In a letter to Mr Johnson, Ms O’Neill said the Government was “miles off track” in setting a positive agenda for the November summit, and that promises of action “are not close to being met”.

After her letter was published in the Financial Times, Ms O’Neill told the BBC Radio 4 Today programme the PM “doesn’t really get” climate change and said there had been a huge lack of leadership and engagement.

The PM met local school children before addressing experts, campaigners and politicians, telling them: “We’ve put so much CO2 in the atmosphere collectively that the entire planet is swaddled in a tea cosy of the stuff.

“It’s now predicted, unless we take urgent action, to get 3C hotter, and in the hurricanes and the bushfires and melting of the ice caps and the acidification of the oceans, the evidence is now overwhelming.

“We know as a country, as a society, as a planet, as a species, we must now act,” Mr Johnson said.

He called for efforts to reverse the “appalling loss of habitats and species” alongside climate change.

The Prime Minister said the UK was leading the way by setting a legal goal to reach net-zero by 2050, saying: “I think it’s quite proper that we should, we were the first after all, to industrialise.

“Look at historic emissions of the UK, we have a responsibility to our planet to lead in this way and to do this.”

As part of the UK’s moves to meet net-zero, the Government will consult on bringing forward a planned ban on the sale of new petrol and diesel vehicles from 2040 to 2035 – and earlier if feasible.

The ban will also include hybrid vehicles for the first time.

Motoring and car manufacturing groups warned the ban would be extremely challenging, but environmental campaigners called for the Government to go further and move the target to 2030.

Sir David said it was up to the UK to organise the world into action in Glasgow.

“That’s why it’s so encouraging the present Government have declared this year, the year not of talking about it, not of alarming people, not of warning, but of action,” he said.

But in the Commons, shadow foreign secretary Emily Thornberry accused the Government of not taking a global lead on climate change, signing up to deals committing to new drilling for oil and gas at the UK-Africa trade summit, and refusing to stand up to the “climate denier-in-chief” Donald Trump.

Questions remain over who will take the lead as president of the talks, after Ms O’Neill was sacked from the role by the PM’s special adviser, Dominic Cummings, on Friday.

Ms O’Neill’s letter in the wake of her firing raised concerns Mr Johnson’s personal animosity towards Scotland’s First Minister Nicola Sturgeon was also endangering the success of the summit.

But Ms Sturgeon wrote on Twitter that “political differences will not stop me and my government working to make it a success”.

And Downing Street tried to avoid being further drawn into the row over the allegations made by Ms O’Neill, with the Prime Minister’s official spokesman thanking her for her work.

Asked if Mr Johnson understood climate change, the spokesman pointed to the PM’s speech and said he had positioned the UK as a world leader on climate with “the most ambitious environmental programme of any country on earth.”