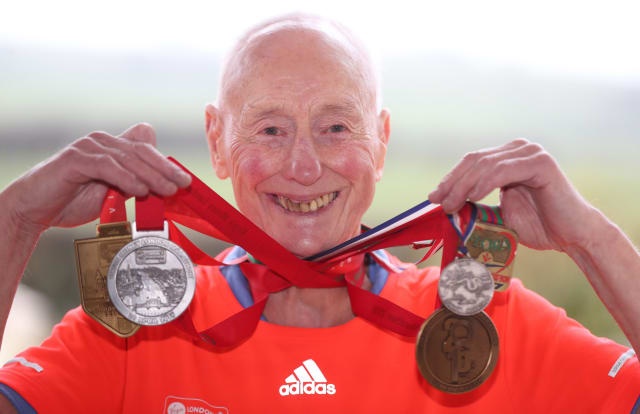 A “select bunch” of runners will continue to collect “the set” when they take part in their 40th London Marathon this year.

The Ever Presents have participated in every single London Marathon since the race was launched in 1981 and the milestone 40th race on Sunday April 26 will be special for all of them.

“It’s perhaps the only club you can only leave, you can’t join,” retired headteacher Mike Peace, 70, from Lustleigh, near Exeter, Devon, told the PA news agency.

“Once it gets past a significant number like 20 or something, we all want to keep it going.”

A record 42,549 people finished last year while 457,861 people applied for a ballot place for this year.

The Ever Presents group was set up in 1996 to recognise those who had run every race and to give them guaranteed entry. It originally consisted of 46 runners but has dwindled every year and just 10 runners remain.

“The first year you had to go to the GLC building and queue there for your place and that’s how I got my place for the first one,” said solicitor Terry Macey, 71, whose home and office are near the start line in Blackheath, south-east London.

Charles “Len” Cousens, 77, from Lowestoft, Suffolk, added: “In the early days, you had to queue up at the Post Office and you wanted to be first in the queue so you got there when it was still dark and camped out on the pavement.

“The first ones in managed to get in the marathon, so you did it that way, it was the only way to do it.

“After we had done the 15th, they said as long as you finish, you get in automatically. You have got a position if you want it.”

Mr Cousens, a gentleman’s barber who works two days a week in Beccles, told PA: “I wouldn’t be surprised if this was my last one.

Dr Malcolm “Mac” Speake, 78, a retired GP from Ipswich, described applying for a place for the second London Marathon: “There was a midnight collection in Colchester so I put my application form in and I put a note on the front of the entry with a £5 note saying please post this at midnight.”

He felt he was part of a “select bunch” and had “got to keep doing this” after the creation of the Ever Presents, he added.

“It’s quite a bit of kudos, you know, people say ‘that’s the fella that’s run every London Marathon’. It’s nice, it’s an ego trip, let’s put it like that.

“It’s just like any collection – if you collect Dinky cars or you collect bottle tops, you want the set. Well, we’ve got the set of the London Marathon. I think that’s what keeps you going.”

The oldest Ever Present, who was the oldest competitor in the 2019 event, is Ken Jones, 86, who lives in Strabane, Northern Ireland.

Mr Jones, who used to finish in under three hours, said he now walks the route which takes him more than seven hours but wants to “get the 40”, adding: “That’s long enough.”

In 2018 he fell and broke his arm but still completed the remainder of the race with his right arm in a sling. He finished in three hours and 54 minutes to retain his Ever Present status.

“If you have done 37 London Marathons, you are not just going to walk away from the 38th,” the school bursar told PA.

Mr Peace told PA there have been some emotional scenes when Ever Presents have started the “phenomenal” race but dropped out: “It’s a bridge you have to cross when your body says you can’t do it any more.”