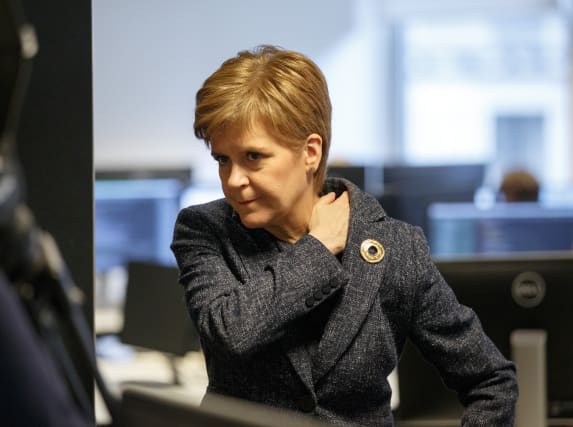 Boris Johnson has been urged to allow Scotland’s Environment Secretary to take part in UK Cabinet meetings in the run-up to the COP26 climate change summit in Glasgow.

The First Minister made the plea after Claire O’Neill, the former clean growth minister who was sacked as president of the event just days ago, claimed an “extraordinary state of stand-off” had developed between the UK team and the Scottish Government.

In a letter to the PM, Ms O’Neill claimed Boris Johnson had “declined in salty terms” her plea for him to “consider resetting” his relationship with the SNP leader.

Ms Sturgeon made clear she plans to attend the event – which is expected to attract some 90,000 people, including around 200 world leaders, to Glasgow.

She said she had attended three previous COPs, adding: “I fully intend to be in Glasgow, my home city, and to play my part in making it a success for Scotland, the UK and the world.

“We must all be serious about our responsibilities.”

A spokesman for the First Minister recalled how the PM had in September told a “rather heady” fringe event at the Tory party conference that he did not want Ms Sturgeon “anywhere near” the COP 26 event.

“That is the basis on which some this has gone forward and that is deeply, deeply unfortunate,” he said.

Despite that, Ms Sturgeon tweeted she was “determined that political differences will not impact on #COP26”.

As a result, she said she had written to the Prime Minister making clear her administration’s “commitment to working well with the UK Government”.

Ms Sturgeon said “constructive discussions” were under way between Edinburgh and London over the use of Glasgow Science Centre, which Scottish ministers booked in November to host events linked to the summit.

The UK Government has now “formally requested the use of that venue”, the First Minister said.

In her letter to the PM, she stressed her administration’s “fundamental” commitment to tackling climate change, with Holyrood having already passed legislation to achieve net-zero emissions by 2045 – five years earlier than the UK Government’s target.

The First Minister said: “To support the UK’s collective effort to both deliver a successful COP and to ensure Scotland and the UK can demonstrate leadership by placing ourselves on track to deliver out respective targets of net zero by 2045 and 2050, I am writing to propose that Scotland’s Cabinet Secretary for the Environment and Climate Change, who also chairs the Scottish Government’s delivery group in relation to COP26, attends the Cabinet meetings on climate change which you have committed to chair.

“I believe this would not only help with co-ordination, ensuring any issues can be aired early and properly dealt with, but would also demonstrate our joint commitment to and responsibility for delivering an event that is not only safe and secure but that lives up to the expectations of the world.”

Ms O’Neill claimed the UK Government was “miles off track” in setting a positive agenda for the November summit and promises of action “are not close to being met”.

Speaking in London, Mr Johnson refused to answer questions about who will replace Ms O’Neill as president of the talks.

A Scottish Government spokesman said a new president “should be appointed immediately to make real progress in building the relationships that will be needed within the UK, and around the world, to deliver a successful outcome from the conference”.

The spokesman also stressed Scottish ministers “expect that all costs associated with COP26 will be borne by the UK Government”, including  policing the event, the bill for which has been estimated to be more than £200 million.