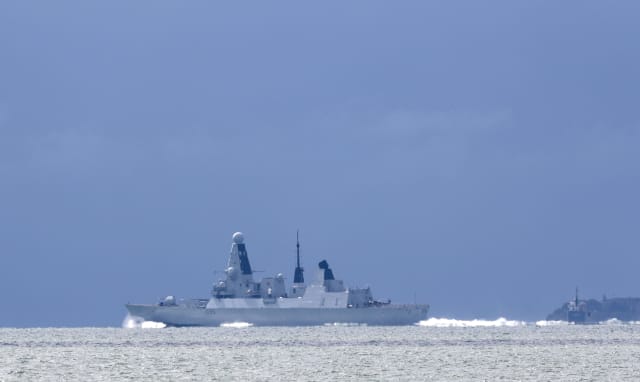 A Royal Navy warship has seized £1 million worth of hashish in a drugs bust while on patrol in the Indian Ocean.

The seizure of 2,500kg of the illegal drugs by HMS Defender, a Type 45 destroyer, comes just two months after it intercepted 131kg of crystal meth, the largest such seizure by the Combined Maritime Forces (CMF).

Commander Richard Hewitt, the commanding officer of the Portsmouth-based ship, said: “Once again Defender has been able to seize a significant amount of narcotics, reinforcing the Royal Navy’s commitment to ensuring maritime security by disrupting the operations of drug smugglers and terrorists.”

Armed Forces Minister Anne-Marie Trevelyan said: “Thanks to the work of HMS Defender and her crew, these drugs will never reach the street and the criminal organisations responsible will be dented financially.

“The substantial seizures made by the Combined Task Force are testament to the seamless co-operation between our international partners that keeps our citizens safe.”

A navy spokesman said: “The drugs bust unfolded after Defender launched her Wildcat helicopter to begin a search for possible illegitimate marine traffic in the Indian Ocean.

“Before long, a suspicious dhow was identified and HMS Defender sent a boarding team of Royal Marine Commandos.”

HMS Defender has been operating in support of Combined Task Force 150, a multi-national force carrying out security patrols in the Gulf.